U17 Wins, Through Great Support 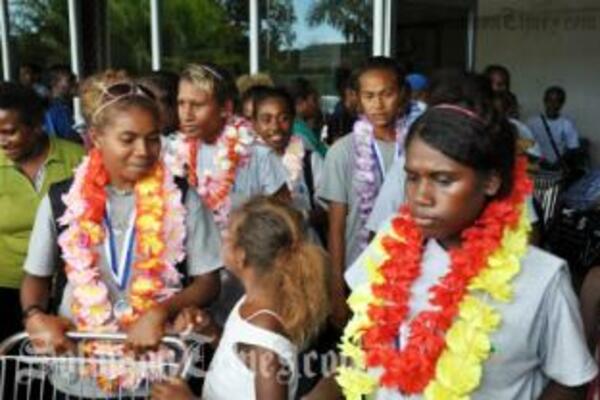 The Solomon Islands National Women's U-17 Team during their arrival this week.
Source: SIFF Media
Share
Thursday, 22 April 2010 10:11 AM

They set a new record by being the first team from the country to finish second in a regional championship. This betters all previous achievements of women's team who participated in similar competitions.

While their first match was a 10 - 0 trouncing by hosts New Zealand our side regrouped to beat their opponents in their final 2 matches. Tonga were handed a 5 - 0 defeat and this was followed by the famous 1 - 0 win over rival Papua New Guinea in their final match.

Their 2 wins out of 3 matches placed Solomon Islands in the second place with 6 points ahead of Papua New Guinea and Tonga who tallied 3 and 0 points respectively. New Zealand who got 3 wins out of 3 dominated the competition and came away the overall winners.

SIFF General Secretary, Eddie Ngava, said that this achievement came about through the strong support of the community and the people that are involved.

"SIFF acknowledges the hard work of the players and the team management and extends its gratitude to the business houses that came forward to support the Women's U-17 Team. This marks a new high for women's football," Ngava said.

Ngava's acknowledgement of the business houses was in reference to donations made by Our Telekom, DJ Graphics Ltd and Solomon Airlines to the Women's U-17 Team.

Our Telekom donated 26 training shirts to the Women's U-17 Team and met all the training costs while the team was in camp at the SIFF Academy. DJ Graphics Ltd. and Solomon Airlines both donated training t-shirts to the team.

The three (3) companies are the major corporate partners of football in the country.