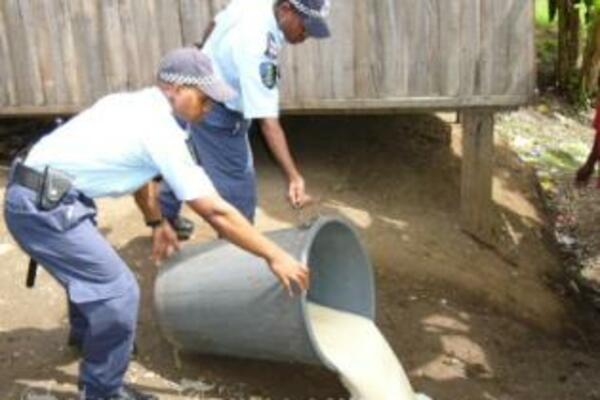 Police pouring out litres of home brewed Kwaso destined for the streets of Honiara.
Source: Photo Supplied
Share
Friday, 29 May 2009 08:44 AM

Police also confiscated supplies and equipments used to make the Kwaso. The two men gave themselves up to Police when officers from Tetere Police and the Honiara Liquor Squad unit confronted them.

"Making and selling kwaso has a serious impact on our community causing unnecessary disorderly behaviour, street crime and violence so these arrests are significant," Mr Sikua said.

"Police also confiscated 750 litres of kwaso and brewing equipment including 38 plastic containers which can hold between 20 and 25 litres."

"We ask responsible community members to assist with any information to help stop the damaging social and health impacts of kwaso on our communities," he said.