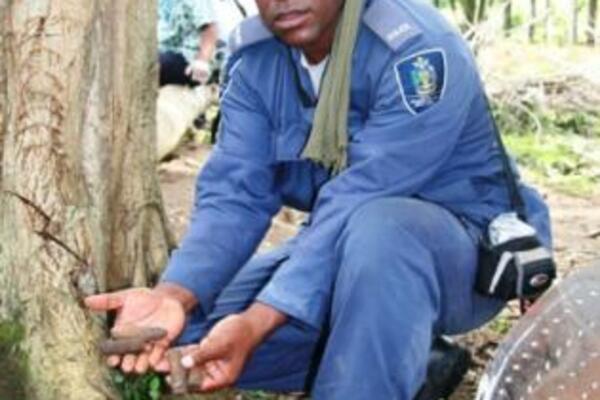 The two young boys were amongst a group of four boys who were trying to extract gunpowder from the anti-aircraft rounds when the rounds exploded while they were nearby.
Source: Photo Supplied
Share
Friday, 19 June 2009 07:51 AM

Royal Solomon Islands Police Force specialists from the Explosive Ordnance Disposal Unit are investigating an incident in which two boys aged 7 and 11 were injured when the 20mm anti-aircraft rounds they were attempting to open exploded at Alligator Creek Wednesday morning.

The two young boys were amongst a group of four boys who were trying to extract gunpowder from the anti-aircraft rounds.

The two young boys sustained shrapnel blast injuries to their stomach, hands and legs and were rushed to the National Referral Hospital for treatment.

The incident comes after recent warnings from the Commissioner of Police, Peter Marshall, where a man, believed to be a relative of the two boys, was left seriously injured from a similar accident last week.

This man is still in hospital with critical injuries, including the loss of both legs, after attempting to cut open explosive ordinance to extract the materials inside for illegal fishing.

Commissioner Marshall said that the incident is a very important reminder to the people of the Solomon Islands that they must never try to tamper with explosives.

"The two young boys injured by an exploding anti-aircraft round on Wednesday were very lucky not to have suffered serious injuries that they may never recover from.

"I urge anyone who comes across unexploded ordinance, including bullets, bombs or hand grenades to not touch them and contact the RSIPF Explosive Ordnance Disposal Unit who will attend the location and dispose of it properly and safely."