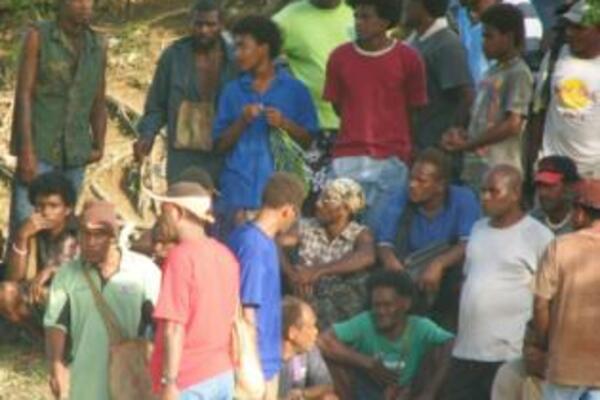 Many flocked across the city's main road to the safety of the hills where the Forum Fisheries Agency is situated.
Source: STO
Share
Friday, 09 October 2009 08:27 AM

Yesterday morning's tsunami warning has triggered fear and panic amongst residents of Honiara.

As soon as the first tsunami watch advisory was heard on radio, school children were sent home, the three commercial banks in the capital were closed for a few hours, shops were closed and people were running to higher ground.

Sick patients, pregnant women and others seeking medical attention at the National Referral Hospital were seen to have flocked across the city's main road to the safety of the hills where the Forum Fisheries Agency is situated.

All staff of the Regional Assistance Mission to Solomon Islands, RAMSI were told to head for the hills.

The banks were opened again in the afternoon after the tsunami warning was cancelled.

In the Temotu provincial town of Lata, closest to where the quake had struck, people were reported to have run to higher ground on the first report of a tsunami.

In Makira-Ulawa, residents of Kirakira town also fled into the bush for safety.

Meanwhile, panic has erupted in other Pacific island nations after the tsunami warning which was triggered by two massive quakes off the coast of Vanuatu this morning.

ABC News Online says the tsunami warning was later cancelled after freak waves failed to eventuate, but people continued to rush for higher ground in Papua New Guinea and Samoa.

In PNG many were running to higher ground, the roads were choked with cars, and many businesses were closed.

In Samoa, the streets in the capital Apia were deserted.

When the tsunami warning went off, Samoans ran to their family homes and then to higher ground.

In hotels, frightened tourists were herded through the buildings, many climbed onto the roof and waited, looking out to sea for a wave which never came.

Fiji's capital, Suva was a sea of chaos as people rushed out of offices to move to higher grounds.

Thousands of workers rushed out of high rise buildings in Suva and into their cars to flee to safety, causing traffic jam along Suva's main roads.

In Vanuatu, schools on the island of Santo, closest to the quake, were closed and people moved into the hills.

In the capital, Port Vila, businesses were closed and people fled from the marketplace.

The local authorities in New Caledonia were evacuating people from the island's eastern shore, and from the nearby Loyalty Islands, to higher ground.

Residents of Tuvalu were also ordered to evacuate from areas close to the sea.

The latest earthquakes came just eight days after quakes off Samoa and Sumatra killed hundreds of people and destroyed thousands of buildings.