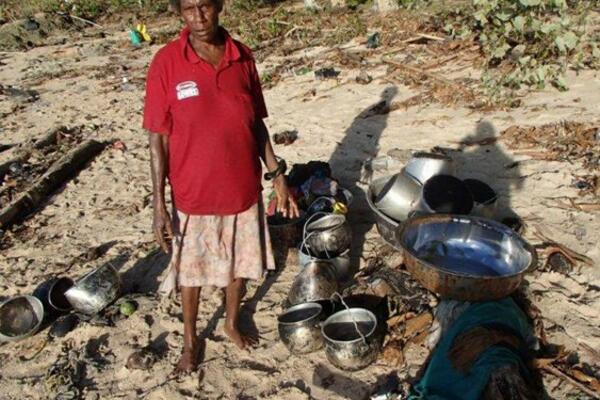 Temotu’s premier, Father Charles Brown Beu, says about 600 people have had to return to the coast because there is nowhere else for them to live.
Source: Photo supplied
Share
Wednesday, 22 May 2013 09:52 AM

Residents of Santa Cruz Island in Temotu province hit by earthquakes and a tsunami in February have been forced to return to their flattened coastal settlement.

At least 10 people were killed and thousands displaced after a magnitude eight quake generated waves that smashed through seaside villages of Temotu province, destroying homes and infrastructure.

Temotu’s premier, Father Charles Brown Beu, says about 600 people have had to return to the coast because there is nowhere else for them to live.

Father Charles Brown Beu says a government pledge to find alternative land for the refugees has not materialized.

It is understood that there are negotiations with landowners on the main provincial centre in Lata, and other discussions also looked at various locations in Choiseul.

“These things take time, we need to be sure that where we settle these victims do not end up being a problem, particularly for those that agree to free up land,” said a government spokesperson close to the arrangements.

“We sympathize with the victims, but the government along with the international community has done a lot to bring back some normalcy.”

He says expert advice has said it would be ok to return, and he hopes that it would be a temporary measure as government seeks a permanent solution.

“I think it is important to note also that some villagers have certain preference, some do not want to leave, others do not want to relocate too far, and that’s understandable.”