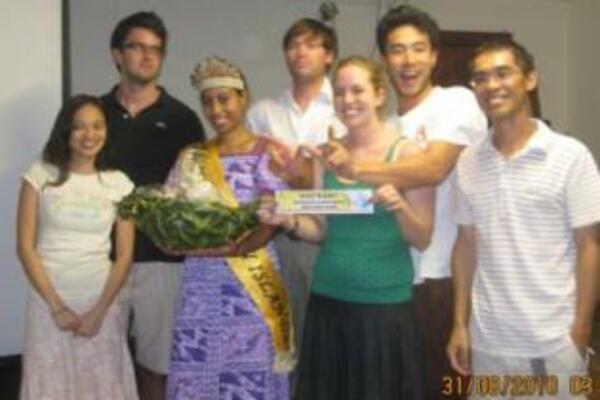 This was in aid of the Christian Care Centre, the only refuge for women and children who are victims of violence or abuse in Solomon Islands.

With "Helping to Combat Domestic Violence" as its theme, the event had seven excited teams vying for the Trivia Trophy.

The Trivia had six rounds of questions based on Movies, Music, Politics, the Bible, local knowledge and Literature and Fairytale. Team games were played in between rounds. However, no excitement could beat the "Finish the Song" game that saw team volunteers singing to their favorite songs to score bonus points for their team.

"As enthusiastic youths, we hope that we've become an example for young people in the Solomons to host many more of such events. We note that there is still yet a great need to assist the hard work already done by our stakeholders. But we believe that providing awareness as tonight, plays a part in helping to combat the growing concern of Domestic Violence," said Miss Solomon Islands, in her opening speech.

At the end of the Trivia competition, Team Wayfarers proved to be the champions, escaping with the much coveted Trivia Trophy and other prizes. Team Break-dancers came second with only a point difference but stole the show in the "Finish the Song". Team Fitim Solo came in third with also a few points difference. All teams however went home with prizes as acknowledgement for their support and participation.

"I am amazed by the immense support from the general public. The Trivia night had turned out to be a great success. Issues on Domestic Violence will continuously be of great concern but as individuals, we can do something to help fight against it," said Karl Kuper, Social Director of the Henderson Hammer Heads rugby team.

Miss Solomon Islands 2009 and the Henderson Hammer Heads rugby club would like to thank the following people for their awesome support towards the event. The event would not have turned out as it had without them. They are: King Solomon Hotel, Fangs Corp, Leksme Ent, DJ Graphics, Sullivans, Trivia Night supporters, the Trivia Night participants and the two hosts; David Murray and Fay Indu.