Trivia Ends With Handover of Goods to Christian Care Centre 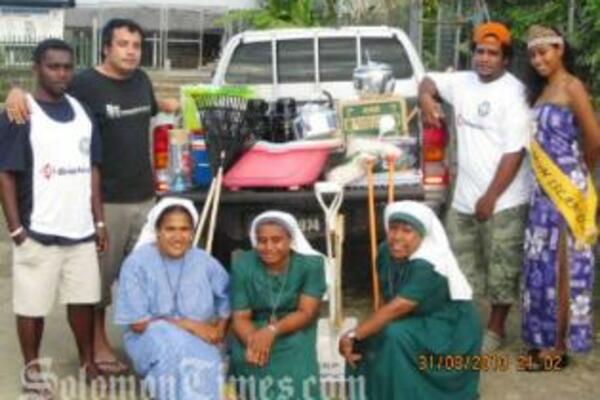 The successful Trivia Night was a youth driven initiative in recognition of the growing concern of domestic violence in the country.
Source: Photo Supplied
Share
Friday, 03 September 2010 08:47 AM

Miss Solomon Islands 2009, Rabobo Toma, together with the Henderson Hammer Heads Rugby club, following their Charity Fundraiser, handed over kitchen, gardening and various essentials to the Christian Care Centre on Wednesday this week.

Hosted by the two parties on Tuesday night, the successful Trivia Night was a youth driven initiative in recognition of the growing concern of domestic violence in the country.

The Charity Fundraiser drew immense support from the general public and saw seven teams vying for the Trivia Trophy. The money raised on the night was spent on the essential needs stated by Christian Care Centre.

During the hand over, Sr. Catherine Rosa, the Centre Director stated that she is very appreciative of the effort by Miss Solomon Islands and the boys from the Henderson Hammer Heads team. "Thank you for having the heart to see the need of the Centre and to come forward to raise funds for it. What has been provided will be a memory of Miss Solomon Islands 2009 reign and the Henderson Hammer Heads rugby club," she added.

"We have been honored to raise funds for the Centre and we look forward to the many more partnerships with the Christian Care Centre. As a rugby team, we appreciate working with Miss Solomon Islands 2009 for a very worthy cause. It is even better knowing that we have provided support to Sr. Catherine Rosa and her team's excellent work," said James Moore, the Hammer Heads Rugby Club President.

"We appeal to the general public to recognize the need to support the Centre's contribution to the Solomons. The Centre is not only a "home away from home" but it is also a refuge to heal the wounds within through counseling, spiritual guidance and advocacy to court processes," says Miss Rabobo Toma.

Miss Solomon Islands and the Henderson Hammer Heads club acknowledged that their effort would not have been made possible without the support from business houses and individuals who contributed to the success of Trivia Night. They are: King Solomon Hotel, Fangs Corp, Mermaid Fashion, Leksme Ent, DJ Graphics, Sullivans and Nambawan Meat, Trivia Night supporters, the Trivia Night participants and the two hosts, David Murray and Fay Indu.