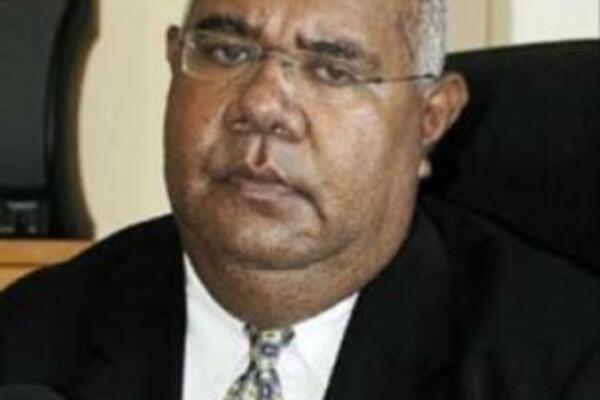 Ratu Joni Madraiwiwi is a Fijian lawyer, politician and was the Vice-President of Fiji from 2004 to 2006.
Source: Photo Supplied
Share
Tuesday, 29 September 2009 08:59 AM

More than five months after their appointments Ratu Jone Madraiwiwi of Fiji and Sophia Macher of Peru will finally be joining the Truth and Reconciliation Commission, TRC, today.

Deputy Secretary of the Truth and Reconciliation Commission, David Tuhanuku says it has now been confirmed that the two non-national members of the commission are arriving today.

Mr Tuhanuku also says the two international commissioners should hopefully join their national counterparts in Auki, Malaita for its provincial stakeholder's workshop. A similar workshop has already been held in Honiara for Guadalcanal.

The two expatriate Commissioners have very strong credentials and are both well respected for their tireless efforts in advancing human rights issues in their countries.

Ratu Joni Madraiwiwi is a Fijian lawyer, politician and was the Vice-President of Fiji from 2004 to 2006. Ratu Madraiwiwi has a Law degree from the University of Adelaide, Australia, and a Masters degree in Law from McGill University, Canada. After working for the Attorney-General from 1983 to 1991, he went on to serve as a permanent arbitrator until 1997, when he was appointed as a judge of the High Court. He resigned from the bench in 2000 in protest against the coup d'état that saw the elected government toppled, the constitution abrogated, and the judiciary reorganized by decree.

Ratu Madraiwiwi is also a human rights commissioner and former chairman of the Citizens Constitutional Forum, a pro-democracy and human rights organization.

Her work with human rights has elevated her to a position on the Executive Secretariat of the Coordinadora Nacional de Derechos Humanos (National Organizing Committee of Human Rights-a coalition of NGO's dedicated to human rights). Since the middle of the 1990's, when the human rights movement revitalized its efforts to restore and recover democracy in her country, she represented civil society in the negotiations that led to the OEA, the agreement and crucial organism that paved the way for Peru's democratic transition.

Once democracy was re-established Dr. Macher joined the Truth and Reconciliation Committee, whose job it was for two years to document the worst tragedies of Peru during its history as a Republic. Nowadays, she continues her human rights work at the Institute for Legal Defense.