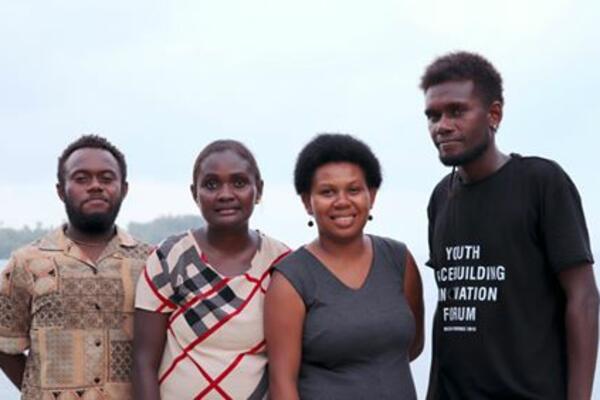 At the top of a steep hill in Gizo, the capital of Solomon Islands’ Western Province, four young people are leading a low-key waste management revolution.

They are the Hilltop Innovators: Giftson, Rosa, Joyce and John.

The 27-year-old team leader, Giftson, explains their guiding principle plainly.
“Waste is a wasted resource,” he says. “We look at it as just waste, but we don’t realize that it is a source of income.”

For years, Giftson earned money selling betel nut and occasionally shuffling passengers along Gizo’s main drag in a taxi. The extent of his contribution to the community was keeping neighborhood kids from careless oncoming cars.

Now, he and his team are tackling pollution. Like many urban areas in Solomon Islands, their hilltop community of more than 200 households struggles with waste management.

Despite roadside collection points throughout Gizo, rubbish pickup in the township is unreliable.

Young people hanging around on the street is a common sight. In Solomon Islands Pidgin, they’re labeled “lius” — people with nothing better to do than waste time.

Those disengaged youth often feel the country’s stagnant economics and politics acutely. Coupled with an international border that is still fragile after spillover from the Bougainville conflict in the early 1990s, the potential for disturbance in the western Solomons is real.

To counter that, the United Nations Peacebuilding Fund (UNPBF) project in Solomon Islands is backing youth who need outlets for their ideas to promote peace and stability.

Their mission is multi-faceted: clean up the environment and create job opportunities for friends with idle time and unspent energy. They’ll lease trash bins made of reused bottles to individual houses, charge for a regular collection service, and resell cans and other recyclables. Their weekly street cleanups are free.

“The aim of HT Innovators for that service is not for only our community, it’s for supplying the service throughout Gizo town,” Giftson says. “That is our main goal, and then another of our goals is to purchase a biogas plant.”

“It’s not good for us to just waste organic waste — why shouldn’t we use it?”

The Hilltop Innovators hope their biogas can be an alternative fuel source for the 94 percent of households in Western Province that rely on wood or coconut shells for cooking.

Their extensive plan came after endlessly asking why Gizo is being inundated with waste during the UNPBF project’s innovation boot camp. It came after the team devised a solution, pitched it against 20 others at the Western Province Youth Peacebuilding Innovation Forum and won.

After a crash course in business (part of the in-kind support from the UNPBF project to the forum winners), they’re ready to roll out their idea from the hilltop to every corner of the township. We’ll see what they do after that.

The UNPBF project aims to support peaceful and inclusive transition in Solomon Islands, jointly implemented by the United Nations Development Programme (UNDP) and UN Women in close collaboration with the Prime Minister’s Office, the Ministry of National Unity, Reconciliation and Peace and the Ministry of Women, Youth, Children and Family Affairs.