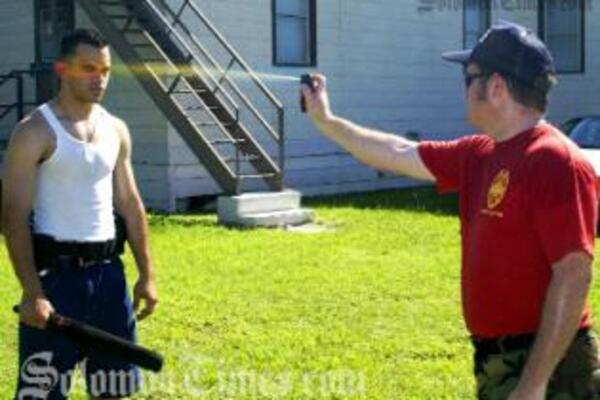 Demonstration of the use of a pepper spray a non-lethal force weapon.
Source: Photo Supplied
Share
Thursday, 16 February 2012 08:20 AM

The Solomon Islands Police Force says the newly approved weapons of non-lethal force will only be available to the Police Riot Squad and only if they successfully pass a strict operational training program.

The Acting Commissioner's statement was made in clarification of an announcement made by the Prime Minister, Gordon Darcy Lilo on Wednesday conveying cabinet's approval for the police force to use weapons of non lethal force.

Sources say that weapons of non-lethal force are designed to reduce the chances of severe injury or death.

"All non-lethal weapons are designed to stop human behavior whether in a riot or other threatening condition without bullets or other life threatening weapons being employed," said a person familiar with the term.

He says pepper spray is probably one of the most widely deployed non lethal crowd control weapons world-wide. The spray is made from a derivative of the cayenne pepper plan and is used to temporarily disable an individual.