Traditional Governance a Priority for Development 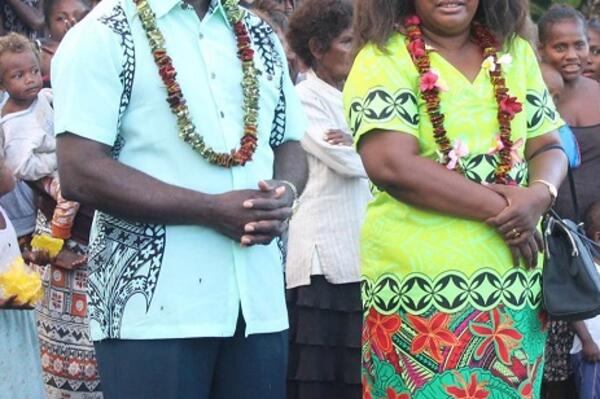 Prime Minister Sogavare said there is a development angle to the role of traditional governance in the government system, especially when it comes to dealings in land for development.
Source: Prime Minister Press Secretariat
Share
Tuesday, 16 August 2016 07:09 AM

The Democratic Coalition for Change Government (DCCG) is taking a bold step towards designing a policy framework that will see traditional governance an integral part of the government system.

The Prime Minister made the announcement in his keynote address at Malaita Province’s 33rd Second Appointed Day Anniversary celebration at the Auki Primary School field where a huge crowd braved the scotching sun and later a heavy downpour, to witness.

“The DCC Government is taking a bold step towards designing a policy framework that will eventually see traditional governance forming an important part of the design of our government system.”

Prime Minister Sogavare said this policy would be developed through the Ministry of National Unity, Reconciliation and Peace and may see the ministry taking on a different name to deal with policies designed to consolidate the national peace process, especially the good work that the Regional Assistance Mission to
Solomon Islands has done.

He said the theme of Malaita’s 33rd Second Appointed Day Anniversary, “Engaging Malaitans in Peace-building and Indigenous Governance for Community Resilience’ is a challenging and thought-provoking theme because it acknowledges amongst other things that Malaita existed long before the introduction of the modern governance system and that peace –building is part and parcel of it.

The Prime Minister said the pursuance of this theme is not without challenges in the setting of a Solomon Islands in the 21st Century.

“Peace-making in its narrow view for example, has now become one of the most expensive thing pursued in the name of custom and tradition and we therefore need to strike an appropriate balance between what is acceptable in custom and its equivalent in its modern day Solomon Islands, in the way we address issues
of peace-building which peace-making is an integral part.

Prime Minister Sogavare said there is a development angle to the role of traditional governance in the government system, especially when it comes to dealings in land for development.

He said in the case of Malaita, the Malaita Think Tank Group has made that clear to the Government that the active involvement of the people themselves and the recognition and respect for the traditional Land Tenure system in the discussion on land for development is key to making land available for development and failing that Malaita will only be going around in circles.

“Congratulations for your great effort, Mr Premier and Congratulations to your Executive Government and Administrative staff for ensuring that Malaita has fully implemented financial discipline and control in its operations.

“This is very encouraging and good news for your Province and its people. We will work together in ensuring that this financial discipline is maintained and improved on.”

“I am happy to announce here that the national Government’s commitment for this year’s PCDF Budget is $50-Million Solomon Islands dollars. The benefits from this will be enormous.

Within that context, he appealed to the Malaita Provincial Government for its commitment to continue providing support in terms of planning with sound policy decisions and to help Malaita move forward in terms of its PCDF qualification and financial performances.

Further to the PCDF Support, Prime Minister Sogavare said the National Government through the Ministry of Provincial Government Institutional Strengthening also provides support for the construction of the new Malaita Provincial Assembly Chamber and on that note urged the Malaita Premier to work closely with Ministries concerned to ensure the project is implemented.