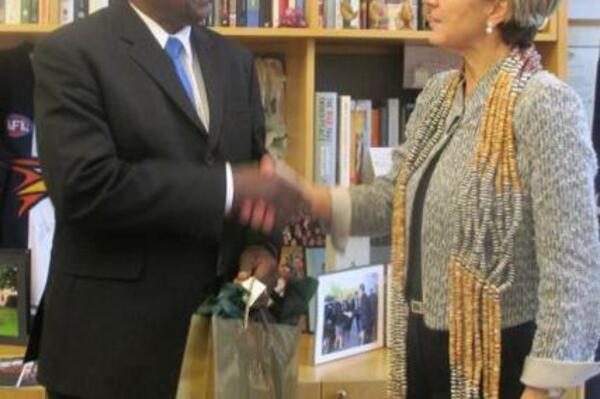 Minister Tozaka’s visit was important as it reaffirms the two countries continued partnership and cooperation.

He said the Government has welcomed the preservation measure applied to Australia’s assistance to Pacific Island countries, including Solomon Islands with an allocation of $92.7million for the 2015-2016 financial years. Solomon Islands remain the third largest recipient of Australia’s development assistance.

Foreign Minister Bishop indicated that the approach taken to insulate Australia’s assistance to Pacific Island countries is a testament to Australia’s commitment to the region.

She added that Australia will provide assistance to countries and regions where it is most needed to ensure Australia’s Overseas Development Aid (ODA) remains effective.

On RAMSI, both Foreign Ministers acknowledged the progress made with the RAMSI policing component particularly in strengthening the capacity of the Royal Solomon Islands Police Force (RSIPF).

On that note, the Government of Australia pledged to maintain its support throughout the draw-down phase of the mission up to 2017 and beyond.
Both Ministers recognized the need to keep the draw-down under review, to ensure RSIPF is adequately resourced with capabilities as the RAMSI support scales down.

On regional issues, both Foreign Ministers reaffirmed their commitment to regional cooperation and underscored the importance of inclusiveness and consolidation in the Pacific Islands Forum.

In that regard, Minister Tozaka, confirmed his participation at the forthcoming Pacific Islands Forum Foreign Ministers Meeting to be hosted by the Government of Australia in July.

As the lead spokesperson of the PIC negotiations on PACER plus, Minister Tozaka raised the issue of continuing support for the OCTA Office. This was well received by the Australia Government and will consider funding support for OCTA to support PICs in the implementation of the PACER Plus after its conclusion.

Minister Tozaka’s visit is symbolic of the Government’s intent to engage actively with its development partners, like Australia. Foreign Minister Bishop indicated she will reciprocate a visit to Solomon Islands later this year.

Foreign Minister Tozaka raised the issue of increasing the caps for Seasonal workers in the horticulture sector and the need to consider engaging Solomon Islands workers in other sectors such as in the Hospitality and Tourism and in the semi-skill trade jobs.

In response, the Australia Government assured it will consider providing assistance to the Labour Mobility Unit of the Solomon Islands External Trade Division.

He told Dr. Dan Etherington, Owner and partner (Kokonut Pacific), the joint venture partnership they have established is exemplary to the Government’s ambition to encourage genuine investments in Solomon Islands through joint ventures.