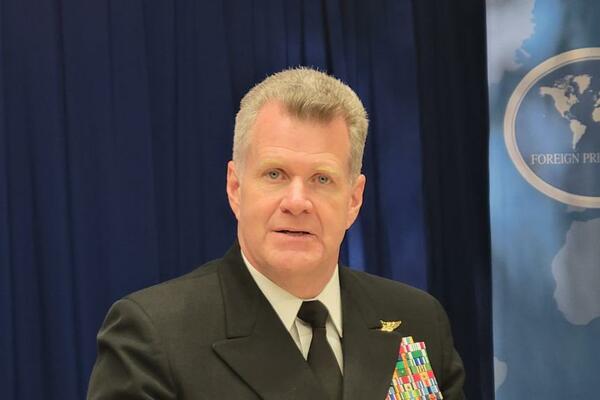 “There’s still a way ahead. But every time a secret security event comes to light, it’s a concern,” he told ABC in Washington DC during an event with foreign journalists.
Source: ST: Nirmal Ghosh
Share
Wednesday, 06 April 2022 10:33 AM

A top US admiral has criticized a potential security pact between China and the Solomon Islands, describing it as a “secret” scheme that worries the United States and its partners.

Australia had earlier warned that a Chinese naval base in the Pacific nation, less than 2,000 kilometres off the coast of Queensland, would “change the calculation” for the Australian Defence Forces.

These sentiments have now been backed up by the commander of the U.S. Pacific Fleet, Admiral Samuel J Paparo, who said he was “no doubt concerned” about the situation.

“There’s still a way ahead. But every time a secret security event comes to light, it’s a concern,” he told ABC in Washington DC during an event with foreign journalists.

“And that is a concern for all our partners throughout the Western Pacific and especially Australia, New Zealand.”

Sogavare said the deal was “ready to be signed”, however insisted that existing security agreements with Australia would be maintained and there were no plans to allow a Chinese military base.

Admiral Paparo supported warnings from Australia's Defence Secretary Peter Dutton about a growing potential for armed conflict in the Indo-Pacific region, which Australians should be “realistic” about.

“I always operate under the view that there is potential for conflict in our region within a few years due to the incredible unpredictability of events,” said Admiral Paparo.

“And who last year could have predicted where Eastern Europe would be right now. In fact, it is our mission to always be ready as a military.”

Admiral Paparo described the AUKUS event, during which Australia will have nuclear-powered submarines through an agreement with the United States and Britain, as a “tangible sign” of rising tensions in the region.