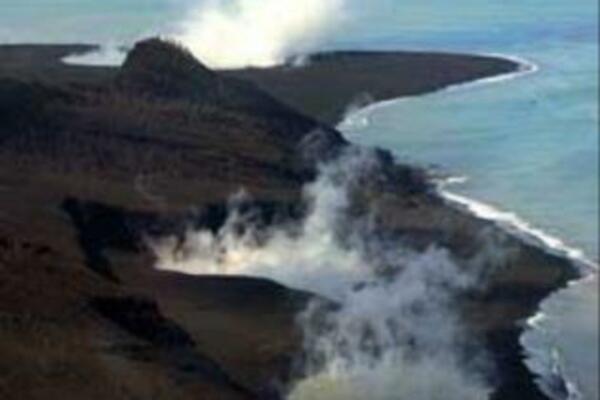 The steaming crater lake that resulted from the massive eruption of an underwater volcano in Tonga's Hunga Ha'apai has attracted its first visitors when a group of four landed on the newly-formed peninsula of the island.

According to reports by the Matangi Tonga Online, the group, which included a cameraman and an Italian golfer, landed on the newly formed peninsula only a week after the massive eruption.
The group 'climbed up to the fragile rim of its volcanic crater, where there is a steaming sulphuric orange lake'

According to the report, one of the group, GP Orbassano, after flying over the volcano and photographing its smoking vent on March 21, decided to go out in a boat on March 27 with a cameraman from the Discovery Channel and a fellow Italian.
'Using an inflatable dinghy they were able to land on the rocky black pumice shores of a large newly-formed extension to Hunga Ha'apai'.

According to the report, GP said that "the main crater is huge and on the beach there are two small vents".

The landscape is surreal. He said that there are large boulders lying on the ground that were thrown up by the eruption, but they crumble into dust when touched.
He reported that he ground was firm to walk on but the rim of the main crater is fragile and cracked.

"It is totally burnt, there are no trees left and the birds are starving, the volcano has killed the fish around the island - and the sea is yellow," he said.

"Volcanoes are unpredictable as they may not give any warning signs that eruptive activity is going to occur. Furthermore, the landforms produced during explosive activity remain unstable for a long period and are very susceptible to collapse.

"As an experienced volcanologist I would strongly caution against further landings on the island whilst it is in a state of activity," he said.

For more pictures taken by the group, please follow the link below to Matangi Tonga Online.