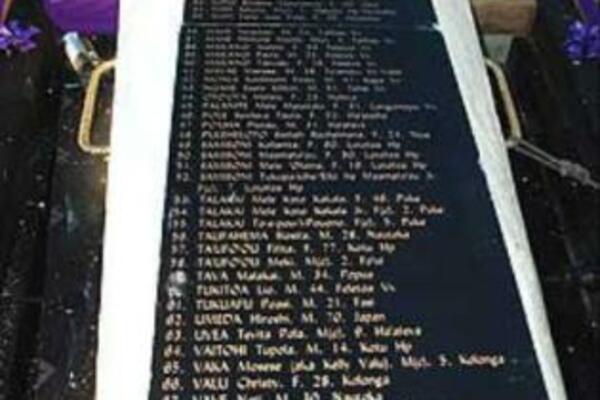 Names of the 74 lives lost in the tragedy, engraved in marble.
Source: Matangi Tonga Online
Share
Wednesday, 26 August 2009 10:57 AM

The island kingdom of Tonga held a mass funeral at sea for the victims of the MV Princess Ashika tragedy yesterday.

As reported by the country's Matangi Tonga Online, the funeral ceremony for the 74 lives lost was held at midday yesterday 'at the spot where the ferry sank, 11 nautical miles, south-west of Nomuka Island, in Tonga's Ha'apai Group, where about 500 people gathered on a flotilla of boats'.

The mass burial at sea for the 72 who went down with the ship (only two bodies were recovered) was a dignified and emotional ceremony that recognised the great loss of the many families affected throughout Tonga.

It was a historical event in many ways, because Tongans culturally expect to bury their dead in a family graveyard, where they can continue pay tributes for as long as they can.

According to the report, memorial stone, shaped like a coffin, and engraved with the names of the 74 passengers and crew who lost their lives at sea was released into the sea in the area where the ship went down.

The vessels gathered around a point where four orange buoys floated in the water marking the last position of the Princess Ashika. It was a fine day and the sea was reasonably calm with the usual rolling waves of the deep sea. As the service began the sound of people singing, music and the cries of the bereaved filled the air.

Then as the ship's bell began to toll there was suddenly dead silence, followed by the playing of the Last Post, then a short prayer, before the memorial stone was released into the sea. As the stone disappeared into the deep water there was a sudden outburst of wailing and crying.