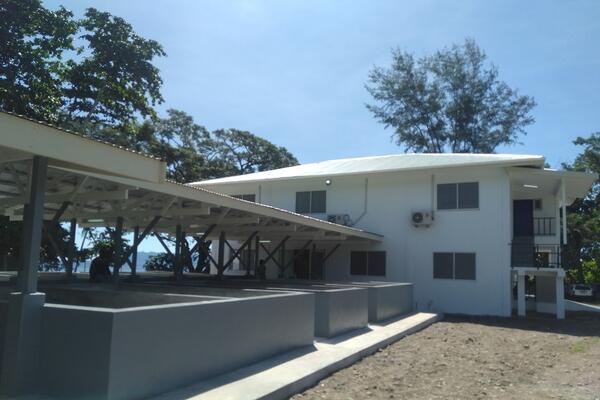 The project of the tilapia facility in Aruligo is in two phases. The first phase includes construction of two buildings while the second phase is the breeding pool for the tilapia.
Source: Supplied
By Jimmy Nolan
Share
Wednesday, 10 June 2020 08:12 AM

Keys to the building facility were handed over to the Ministry of Fisheries and Marine Resources (MFMR) by the contractor.

Under Secretary Patterson Lusi when receiving the keys says this marks an important milestone in this project.

Lusi says despite the COVID-19 pandemic, they had been able to complete a component of the project within the timeframe given.

"After the completion of the second phase of the project we will be providing training to all tilapia farmers around Solomon Islands, and at the same time distribute the different tilapia species to farmers. The main idea is to increase food security in our country. That's one of the main intentions of the project”, Lusi said.

The MFMR says the Mozambique tilapia is a non-native fish to the Solomon Islands that is currently cultured at a low scale within the country and is either consumed by the farmers or sold in local markets.

Farming of this particular tilapia is done in Malaita and Guadalcanal. Mozambique tilapia is farmed and harvested for food and income by households particularly in the rural areas of Malaita.

The project of the tilapia facility in Aruligo is in two phases. The first phase includes construction of two buildings while the second phase is the breeding pool for the tilapia.

Mr Lusi says the project is only focused on breeding tilapia. At the same time it will provide training to farmers throughout the country who are interested in tilapia farming.

He says the building project is funded by the New Zealand Government with an estimated cost of SBD$3.5 million. Funds for the project are channelled through the MFMR.

The facility will also be the Centre for breeding and supplies of fingerlings to the local farmers, maintaining broodstock quality, researches, and a training centre for the local communities, farmers, and scholars.

The ground breaking ceremony for the site was held in June 2019. It is a priority focus of the National Government to redevelop the Aruligho (old ICLARM) to become Solomon Islands own National Aquaculture hub and research centre.

Aquaculture is recognized by the Government of its importance towards supplementing the shortfall anticipated in the wild fish supplies and demand in the future.

The New Zealand Government is recognized for the role they play in this establishment.