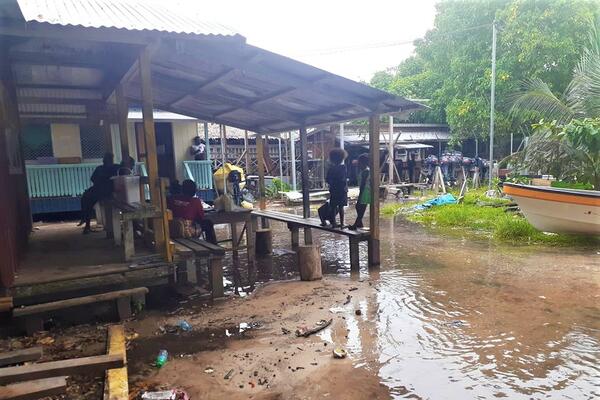 Residents on Taro island this week were caught by surprise when their homes were encroached by waves, especially those residing in the low lying coastal area.
Source: Supplied
By Georgina Kekea
Share
Thursday, 14 January 2021 10:21 AM

The premier of Choiseul province is calling for assistance in his government's efforts to carry out work on the Choiseul bay township project.

Residents on Taro island this week were caught by surprise when their homes were encroached by waves, especially those residing in the low lying coastal area.

“People were confused by this phenomenon. We have to call a friend in Honiara to understand what this is”, Mcleen Biliki, a resident on Taro island told Solomon Times Online.

Biliki says the last encroachment of sea waves was said to take place in 2018 and prior to that, after the 2007 tsunami.

For a long time, the residents on Taro island have struggled with the effects of rising sea water. People on the island rely mainly on rainwater tanks for drinking, cooking and bathing as there is no source for clean freshwater on the island.

Taro island is one of the first islands in the country to speak of relocation. This was after the Choiseul Integrated Climate Change Program (CHICCHAP) organized by the national government brought international agencies, development partners and NGOs to Taro island in 2013. Their work was to plan adaptation strategies and encourage resilience to environmental degradation and natural disasters in Choiseul province.

However speaking to Solomon Times Online, Premier Watson Qoloni says work is progressing slowly for the province. Despite his optimism in ensuring the township relocation project is fulfilled in a good time, he is also sad the province has not received much support as anticipated.

He says the province does not have a big income earning base thus is faced with a lot of challenges when it comes to addressing the issues of climate change in the provincial capital.

In addition, Qoloni says the change in weather events continues to be a threat for the people on the island.

“At least if we have seawalls built while we progress work on the township relocation will greatly support us here. I wish there is assistance provided to us while we struggle with the work of building our new township”, the Choiseul premier says.

But a synopsis on ‘Climate Change Adaptation Plan Choiseul Bay Township - Solomon Islands says it will be impossible to fully mitigate risks on Taro Island in the short or long term.

“Only the progressive relocation to the mainland would address risks associated with present and future tsunami events and severe coastal storms”, the report stated.

However in order to start work on the township, the Choiseul provincial government are expected to complete feasibility studies and technical assessments for key infrastructure such as roads, water, power, waste management and wastewater management.

It was only recently, Solomon Water has called for applications to carry out feasibility study and detailed design for water supply and waste water systems for the proposed Choiseul township. The said work should start this year. The project for Solomon Water is financed by the Asian Development Bank (ADB) and the World Bank.

“We are thinking of relocating the school and the hospital to the mainland first. If we have the finances, we can speed up work for this project”, Premier Qoloni says.

In November last year, Member of Parliament for East Are’are, Peter Kenilorea (Jnr) in parliament had called on the government to redouble its efforts on climate change issues.

“Our people are in the frontline - we keep on saying this in international forums, but actions speak louder than words when it comes to this particular issue. So, I would encourage the ministry, the good minister, to continue to redouble its efforts in this front”, Kenilorea has said.

From the provincial capital of Choiseul, 495km from Honiara, Premier Watson Qoloni says “we need so much help from the government. As you know we are losing the island and we need at least a bit more help in our township relocation. Scientists are predicting that in 50 years time, most of the island will no longer be habitable ”.

The core function and responsibilities of the government’s climate change division is to closely monitor the extent to which Solomon Islands is vulnerable to the effects of climate change, play a leading role in mobilizing resources for adaptation and mitigation initiatives.

This includes relevant and priority research and information dissemination activities, seek resources to support national programmes to mitigate the causes of climate change and to be the country’s lead agency in addressing Solomon Islands obligations as a party to the United Nations Framework Convention on Climate Change (UNFCCC) and Solomon Islands commitment to the Pacific Islands Climate Change Framework.

“Maybe the township will not be completed in our time. But I will be very happy to receive any assistance at all in our efforts to build the new township”, Premier Qoloni says.

A project manager has been engaged by the provincial government to oversee the work of the Choiseul bay township project. Choiseul bay is the relocation site.

Taro is home to about 1000 Solomon Islanders and is the capital town of more than 36,000 people in Choiseul province.