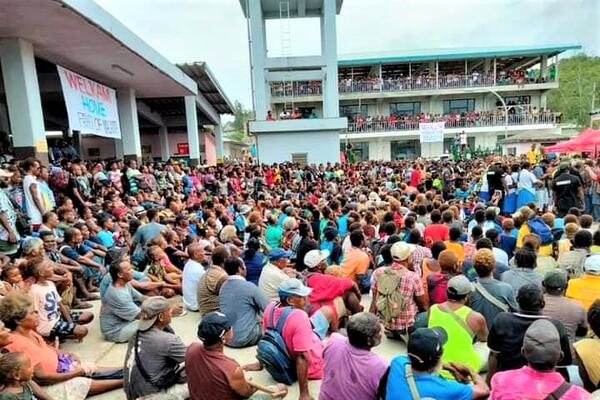 “I will go out and talk with my people and ask their views. I believe the best way is to go down to the village people and listen to them,” Suidani said.
Source: Zfm
By Samson Sade
Share
Tuesday, 12 October 2021 10:42 AM

Thousands waited patiently in Auki for the arrival of their Premier, Hon. Daniel Suidani, yesterday.

It is a rare sight anywhere in the Solomon Islands for a political leader to get such a reception. Solomon Islander are largely passive when it comes to political support, often waiting to cast their vote and go back to their daily lives.

Premier Suidani has somehow inspired the masses, a man of strong convictions he has been willing to stand up to the national government on issues he does not agree with. He has often said that what he is raising are issues of concern to his people.

By doing that he is not just giving people ownership over his arguments, Suidani is cementing his stature as the man of the people.

Despite the reception, Premier Suidani is facing a vote of no confidence, with many in his executive said to be deserting him. They say they no longer have confidence in his leadership.

Elijah Asilaua, spokesperson for the group moving to oust Premier Suidani, says they are preparing allegations that will be used against Suidani during the planned motion.

Suidani has said in a recent interview with the national broadcaster SIBC, that he will go talk to his people and hear from them after he is released from quarantine.

“I will go out and talk with my people and ask their views. I believe the best way is to go down to the village people and listen to them,” he said.

Premier Suidani also said that the MARA provincial government is willing to join hands with the national government to develop the province, except on a few issues, such as government’s switch of allegiance from Taiwan to China.