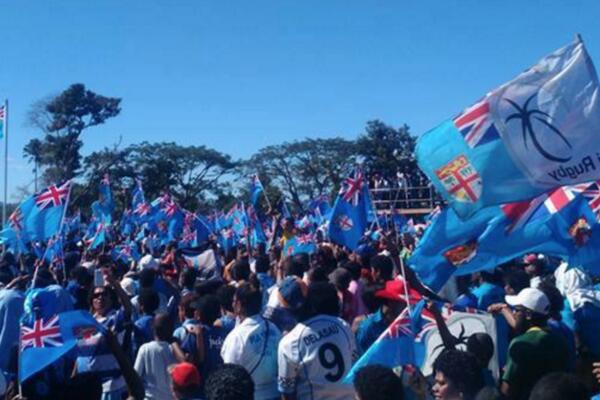 The Special Fiji 7s team Gold Medal celebration march is underway and thousands of people have joined the team for the walk to the ANZ Stadium from Flea Market.
Source: Pasifik News
Share
Monday, 22 August 2016 12:41 PM

It is already a sea of blue at the ANZ Stadium and Suva Flea Market as thousands of people have turned up for the Special Fiji 7s team Gold Medal celebration.

The ANZ Stadium is now open and people have already filled up the Grandstand.

The Special Fiji 7s team Gold Medal celebration march is underway and thousands of people have joined the team for the walk to the ANZ Stadium from Flea Market.

Legend FM’s Alex Elbourne is at the Suva Flea Market for the celebration march.

“Our gold medal winning team left in a vehicle from GPH and is heading in a convoy with a band accompanying them from 9.30am.

“The march started from the Suva Flea Market, through to Victoria Parade, turn left at Thurston Street, on to McGregor Road, Bau Street, then to Laucala Bay Road and to the ANZ Stadium.”

The programme at the ANZ Stadium is expected to start at around 10.15am.

President Jioji Konrote and the First Lady will then meet the 7s team members.

There will be a thanksgiving prayer followed by the traditional welcome ceremony to be carried out by the people of Nakelo.

President Konrote will then present $30,000 each to the team members and various medals given by the state in recognition of their superb performance.

This will be presented to coach Ben Ryan and the members of the team.