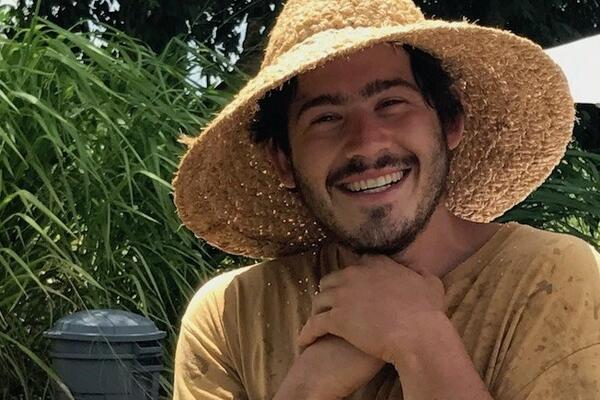 His banana quest also brought him to the Solomon Islands, where he learned of a slender banana with a fluffy texture, nicknamed the “Five Minute” banana.
Source: Counter Culture Organic Farm
Share
Monday, 22 July 2019 11:02 AM

He may well be the World’s bona fide banana man, he loves the fruit, and spends most of his time understanding and expanding his banana library.

Gabriel Sachter-Smith grew up in the mountains of Colorado where he began studying bananas at the age of 13. He says that what fascinated him was that bananas don’t grow on trees; the plant is actually a giant herb.

“Trying to understand what that meant led me on a never-ending quest to learn more about bananas,” he says. “I was never particularly interested in eating the fruit—it was really the concept of what exactly was a banana plant”?

He moved to Hawaii in 2007 to attend the University of Hawaii at Manoa where he earned his BS in Tropical Plant and Soil Sciences in 2011, and his MS in 2015. During his time at the university, he helped to start and eventually run the Student Organic Farm Training (SOFT) program for 5 years where he gained hands on experience in growing and marketing a wide variety of crops.

He maintains a banana library of Asian, African, Pacific and Hawaiian cultivars on a farm in Waialua.

His banana quest also brought him to the Solomon Islands, where he learned of a slender banana with a fluffy texture, nicknamed the “Five Minute” banana for how quickly it cooks.

There, he ventured to Makira, a place he called “the heart of the banana world,” where a woman had collected 80 different cultivars.

Sachter-Smith breeds new varieties hoping to establish plants that can stand up to diseases like banana bunchy-top virus, which has devastated Hawai‘i’s banana production since it was introduced 30 years ago.

Sachter-Smith’s passion is simple and profound. “I just enjoy pursuing things that interest me,” he says. “Most people think of ‘the best banana’ as the one that tastes best to a human when the fruit is ripe and raw. I like to think each different type of banana has its own unique highest purpose, and it’s my calling to figure out what that is for each one, to know its story.”

He estimates that there are about 3,000 banana varieties in the world, “depending on how you measure it—which is more philosophical than scientific,” he says. “But I’ve accepted the true answer is unknowable, so that also means I will never stop learning about them because I want to try to know about them all.”