The War Canoe of the Western Province 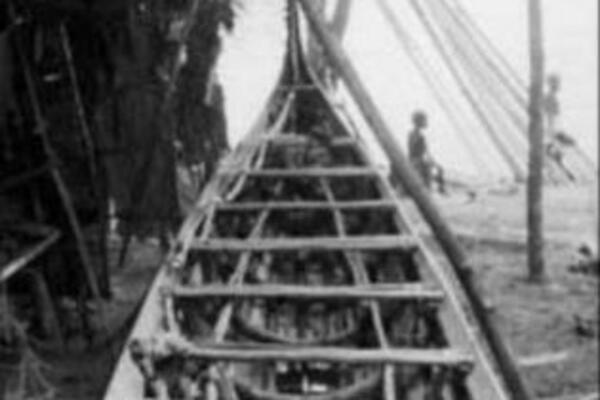 The war canoe from Western Province was once a revered sight in the waters of the Western Solomon Islands.

The war canoe originated from the people of Roviana in the Western Province, known as 'Tomoko' in their native mother tongue.

In an interview with a man from Roviana Lagoon, Mr. Roni Zina said that the Tomoko was used during the head hunting days to carry war raiding parties.

He said that the maximum the Tomoko can carry depends on the size of the boat, but an average sized Tomoko could fit fifty to two hundred warriors. "Some of them are very big, big enough to carry the warriors in only one trip," said Mr. Zina.

Mr. Zina said that often, when these warriors were paddling, they call on their gods and deities for strength. "They were all possessed by the gods, who makes their body strong during travel...it also prepares them for fighting."

"This ancient god is called Tiola, when the warriors go out to war, they call on him because they regarded it as the god of the province," he told Solomon Times.

He said that even now, when there is an escort in the Western province for a celebration, they still use the war canoe, "some still pray to the Tiola to paddle the canoe."

There was only one downside when it comes to being a warrior on the Tomoko. "If anyone of the warriors were already married, they were not supposed to sleep with their wives a week before they go out to war," said Mr. Zina.