The Driving Force Behind Waka Mere 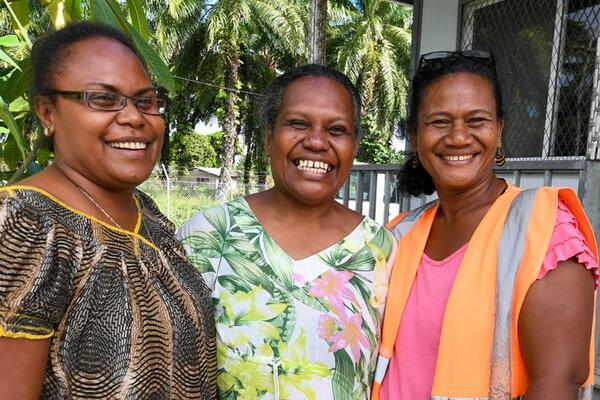 Inspired by the high rates of domestic violence and the need for women’s economic empowerment, Ms. Ruth Maetala, a native of Solomon Islands joined the program in 2016.

The program was all about providing smart business solutions for companies tackling gender issues.

One of the challenges women face in businesses is lack of confidence. Generally, women in Solomon Islands are shy when it comes to public life. Confidence building and leading are areas where women are challenged with at all levels.

This was no exception for Ruth.

In addition to the lack of confidence Ruth also observed that women are struggling to balance work and private lives.

She was then determined to work with private companies in Solomon Islands to look closely at some of these issues and collaborating to find smart solutions to deal with gender inequalities.

When Ruth first joined the International Finance Corporation (IFC) she experienced fear of hierarchy many times, and fear of male colleagues but she overcame this by determining that she has something to contribute to her country and to the women.

At the same time, she looks up to business leaders and feels that every opportunity is a learning curve.

She was inspired by many things but one of the things that drives her daily work is the thought that her granddaughter would grow up one day in an unsafe workplace.

She works for her granddaughter’s future as she wants to see her in a country that is safe for women and girls, men and boys.

Before joining the program as IFC/SICCI Gender Coordinator, Ruth worked for the Solomon Islands Government as Director of Research and Policy Unit of the Ministry of Women, Solomon Islands NGO Partnership Agreement as the Coordinator.

The Waka Mere Commitment to Action is a two-year initiative promoting gender equality in the private sector in Solomon Islands, led by IFC and the Solomon Islands Chamber of Commerce and Industry (SICCI), with support from the Australian and New Zealand governments.

Through Waka Mere, which means ‘She Works’ in pidgin, fifteen (15) of the biggest companies in Solomon Islands have been working to meet at least one of three commitments: promote more women into leadership positions, build respectful and supportive workplaces, and increase opportunities for women in jobs traditionally held by men.

In the last two years, the lesson Ruth learnt most is communication.

As a local partner SICCI is a key player in private sector and national development therefore Ruth ensured that her work on Waka Mere had to link to the organisation’s strategic priorities which was about policies that would create jobs and growth as well as delivers value for business.

To achieve this, she ensured that there was constant and an open communication line.

Communication with the businesses was a must as every business is different in their operations.

Therefore, identifying a key contact in the company was important. This is a senior person who is able to communicate but also influence decisions.

Most importantly communicating with responsibility.

As a representative on this very important program with highly-visible agencies and businesses, Ruth had to ensure she was aware of processes and protocols of communication.

Ruth felt that she came in as a small voice but pushed herself to live above the norm and be a leader.

She feels that in such a workplace you need to have backbone. This means when one makes a mistake one should take responsibility for it.

Internally within the gender team once the project got off the ground communication with the team remotely who were based in Sydney, on a weekly basis was a major ingredient to the project’s success.

Ruth says that communicating with SICCI was so important because they were the key partners on the ground.

“Without the companies who are members of SICCI I think Waka Mere would not have been a success. Communicating with the company management on a regular basis and staying in touch with department heads and the HR departments were also key.

“A couple of times companies invited me for coffee, and we would just talk through their individual company ideas and plans. To me, this was important because they needed the space to own the initiative and ensure that the Waka Mere activities aligned with their core business,” she said.

Although women struggle to lead in many areas, one thing is apparent to Ruth.

“One has to make a deliberate decision to be a leader. That then means you cannot take things personally and you have to protect your emotions. You have to face the fear of failure. Sometimes one accepts looking like an inexperienced newbie to achieve things and get buyin!”

“Some women are leaders in their departments and companies and this is a challenge to men but slowly men are accepting women as leaders,” Ruth said.

“The Waka Mere project empowered the women so much,” she added.

When the conversation started with businesses, there was a broad acceptance that it was a problem that there weren’t opportunities for women.

“But when it came to act on domestic violence – a huge problem here with 64 percent of women experiencing violence in their lifetime – businesses took more convincing.”

The Waka Mere Commitment to Action was launched during the Australia Solomon Islands Business Forum in July 2017.

In the beginning there were seventeen (17) companies who signed up. But then some dropped off and the initiative completed its two years with fourteen (14) companies.

“When doing the baseline survey, it was a bit difficult for companies to give information, but I kept being persistent and consistent in my approach.

“I built relationships by going back to the CEO of SICCI for advice on how to approach companies.

“I made some face to face visits and talked to general managers. I also built relationships by attending Business After 5 events which is a huge networking opportunity in SICCI,” Ruth said.

She said before the program, it was difficult to talk about domestic violence in companies.

“This requires a lot of patience. It also requires someone to learn quickly to hold collaborators accountable for things we say. It is also about respecting colleagues’ ideas and implementing on time.”

For the private sector in Solomon Islands, this project has made a huge difference.

Men are now more aware of things like emotional violence and financial violence – that abuse can happen in different ways, like stopping someone from going to work, not just through physical violence.

In Solomon Islands, we have the ‘wantok’ system – a kin system that can be seen as social security but can also be a source of financial burden.

During the learning event of the program, one male employee of one of the Waka Mere companies said that he lived in a house provided for by the company he worked for and shouldered the burden of feeding and accommodating people at his home.

He said he didn’t know that when he felt pressured by so many additional people at home and his salary is not enough, that could be termed as financial violence. This can also result in emotional distress.

“All In all, there has been so many positive developments that we’re proud of. For instance, at the start of the program, one in four people didn’t feel safe or comfortable at work. Now that number has been reduced to one in ten. In Solomon Islands, women seldom drive. As part of the program seven companies supported women to get driving licenses,” Ruth said.

“Companies are now more open. It’s not only about ticking the boxes; managers are now able to talk about gender violence more freely than before.”

Ruth said some of the obstacles she came across was first the business language.

“One year into the program I was struggling with communicating by email and making decisions having worked alone in the country and being part of the East Asia Pacific team,” she said.

“When I first completed Block 1, I came back and cleaned my office. Next, I was determined to practice emailing and ‘over’ communicating with my mentor Ms. Karen Mitchell.

“She was an awesome mentor. The course helped me to become a professional in everything I did from home to work place to my colleagues and to the companies I worked with,” Ruth said.

Another obstacle was companies not responding to emails on time.

“Sometimes I make a couple of phone calls to that particular company and after that I make a face to face visit. This has been ongoing until the end of the commitment.

“By communicating regularly, the team gave me a cell phone so I could send direct text messages to people, or email copying their managers and thanking companies publicly when their performance is good.”

Ruth believes Waka Mere is a good model for businesses in Solomon Islands and is also a good development model for youths to learn from.

“I feel that SICCI deserves an award for championing the work locally with its partners and supporters Australian and New Zealand government.”

Ruth encourages other women, leaders and change makers to continue the good work that has been started.

“I didn’t plan Waka Mere – I only gave it a pidgin name. And I am forever grateful to my God, my husband and children and my friends for being by my side throughout this journey.”

Ruth earlier this week joined representatives of IFC, SICCI and its members, the Prime Minister and government officials, the Australia High Commissioner to Solomon Islands and the business community in celebrating the success of Waka Mere during a business breakfast on Tuesday 5th November, 2019.