“The Art of Living”: How Traditional Skills Help Sustain the Rural Populace 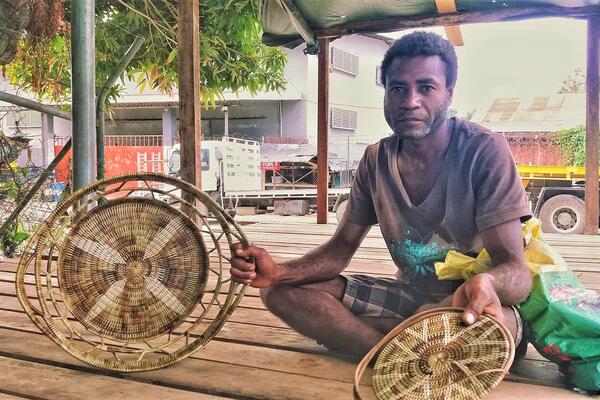 For Jefferey though, it is much more than just keeping one’s culture and traditions alive – it has now become a way of earning much needed income.
Source: STO
By Jeremy Gwao
Share
Thursday, 11 February 2021 10:30 AM

Our traditions and culture are being overwhelmed by modernity, but a lot of people in the rural areas are keeping certain aspects of it alive – not because they are fighting against modernity, but because of necessity.

Traditional arts and craft have been an important feature of our culture and way of living – it showed how we as a people interacted with our natural environment.

Jeffery Philemon Pua is a traditional basket weaver from Lam’e village, located in the interior parts of North East Guadalcanal. He is now 40 years of age and earns his living weaving traditional baskets, a skill he picked up from his father – which was passed down from past generations.

“I spend a lot of time in the forest searching for the right vines. The basket combines two types of vines, in our dialect the two vines are called "tuanialu" and the other called "asa.” When you combine them it becomes very strong, so that is what we use to weave these baskets which we call "pera," Jeffery explained, pointing out where the two vines intersect to weave the basket.

The baskets are strong and is often used to carry crops from the garden – given the distance one must walk they had to be strong. Today the baskets are popular with tourists and locals alike – a must have accessory when going to the various fruit and vegetable market outlets in town.

For Jefferey though, it is much more than just keeping one’s culture and traditions alive – it has now become a way of earning much needed income.

"Growing up in the highlands is tough, and I am also not educated, so the only thing I know is how to weave baskets. I also do this to support my younger brother who now has a chance to go to school,” Jeffery said.

He explained that he is the second youngest in a family of five, and his youngest brother is the only one that has managed to attend formal schooling – he says he wants to make sure that his brother achieve his dreams.

"I’m trying to make a way for my brother, he is now doing form five at Koloale Community High School, and I want him to just focus on his studies while I look for the money to help him,” Jeffery said with a determined look.

"I go from door to door at some offices in town, people get angry with me, some make jokes about me and my baskets, but all that just makes me bold, and I know why I am doing it so I just keep going.”

“Our tradition is an art, but this is my art of living,” Jeffery said with a smile.