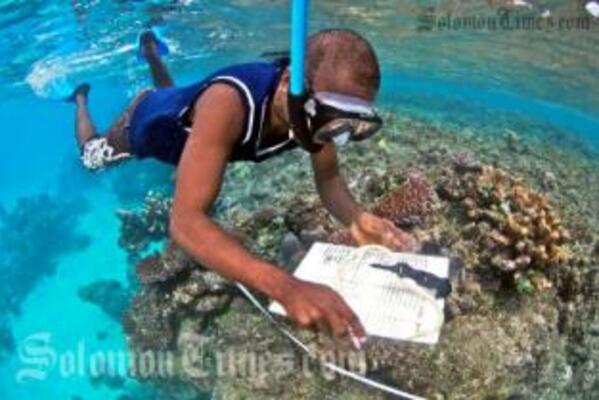 A recent survey of coral reefs around Tetepare Island, in the Western Province, has confirmed the islands reefs are in excellent health.

Tetepare Island - the largest uninhabited island in the South Pacific - is one of the conservation jewels of the Solomon Islands.

The island is conserved and managed by the Tetepare Descendants' Association (TDA) with the support of the Sustainable Forestry Conservation Project of the European Union.

TDA marine monitors last week conducted a Reef Check survey at 12 sites around Tetepare Island. They surveyed reefs inside Tetepare's 13 km-long Marine Protected Area, as well as outside the MPA.

The marine monitors found high coral and fish diversity and healthy populations of key fish and invertebrate species, both inside and outside the MPA.

"We found reefs around Tetepare to be healthy and the ecosystems intact," Mr Plummer said.

"During the survey, we found good numbers of bumphead parrotfish, groupers and trochus. We also saw healthy populations of green turtles and dugongs - species that are becoming rare in many places across the Pacific."

"The coral was in excellent health and the surveys showed our MPA is working well and helping to restock waters outside the protected area. We saw no coral bleaching events, nor outbreaks of destructive species such as crown of thorns starfish," said Mr Plummer.

"We are very lucky on Tetepare to have such a pristine marine environment because there has been no logging on Tetepare so the surrounding reefs have not suffered damage caused by siltation which can occur in areas which have been logged."

Mr Plummer said Tetepare's MPA was a no-take area and was regularly patrolled by TDA rangers. "Thanks to the MPA and the regular ranger patrols, we don't have problems with overfishing, or overharvesting of marine creatures such as trochus or triton shells," Mr Plummer said.

Mr Plummer said that the MPA is an important nursery-ground for young fish, turtles and invertebrate species such as trochus. "And it is also home to rare species such the green snail which has been wiped out in many places in the Pacific due to overharvesting."

"And it is a great place to snorkel and a real asset for the TDA's Tetepare Island Ecolodge, many of our visitors to the Tetepare Ecolodge have told us the Tetepare lagoon is one of their favorite snorkeling places in the world," Mr Plummer said.

Mr Plummer said that TDA is proud to be the custodian of one of the largest integrated land and marine conservation areas in the Solomons. He said the TDA had worked hard to conserve Tetepare and its waters for future generations, and to use the resources on the island sustainably.

"It is fantastic to see a community taking such a proactive approach to conservation and sustainable use of resources," he said.

"And in exchange for their foresight, TDA communities have access to a healthy marine ecosystem, as well as job opportunities as rangers, marine monitors on Tetepare, and as guides and hospitality workers at the Tetepare Island Ecolodge."

A team of TDA marine monitors conducts Reef Check surveys at 12 sites around the island every three months. They also monitor fish, trochus, seagrass, green snails, beche-de-mer and giant clams throughout the year.