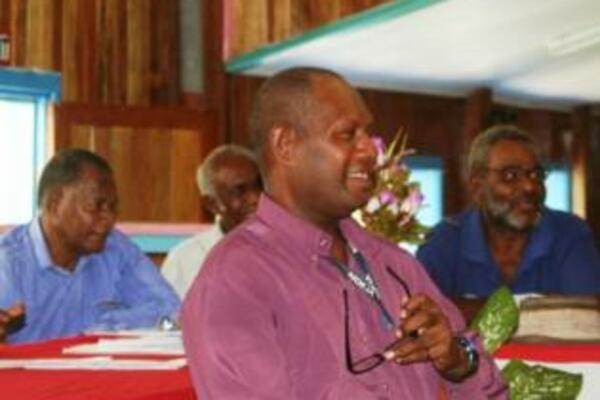 Leaders and People of Temotu Province have demanded members of the current parliament to pass the Political Parties (Registration and Administration) Bill and the Constitutional Amendment Bill without any form of obstruction.

A four-member team from the Office of the Prime Minister and Cabinet headed by Chairman and Special Secretary to the Prime Minister, John Keniapisia traveled to Lata on Saturday to listen to the peoples' views on the bill.

The Bill aims to strengthen the country's existing weak political party system, which for years have been blamed for creating political instability and poor governance.

A similar nationwide consultation process was undertaken last year in six provinces while Leaders of Rennell-Bellona Province were consulted in Honiara.

In his opening address, Temotu Premier Edward Daiwo acknowledged the ruling CNURA government for playing a key role in trying to put an end to political instability - an initiative he described as "significantly necessary for the future of Solomon Islands politics."

He said the cries of the isolated people of Temotu have been neglected for a very long time due to unsuccessful government policies and programs triggered by political "grass hoping".

"We have witnessed for the last 32 years that no political government has successfully implemented their policies and programs because they come and go only for the convenience of certain politicians and cronies." "This system must be stopped and the bills must be passed," Premier Daiwo insisted.

"Today I stand to urge our politicians to listen to our peoples' cry for political stability. We want MPs to be servants of the people to address the problem of corruption and political volatility."

Sir John added: "We should use this opportunity to re-direct our future for a more peaceful and politically stable Solomon Islands. Let's create a better political environment for our future.

Provincial Assembly Speaker, Gabriel Teao thought the bills are long overdue but very important for the future of Solomon Islands. "I see it as overdue. This should happen long ago but I feel the Bills are good to avoid "political prostitution". It is good to prevent Politicians from being lured by money," Mr Teao said.

Most leaders have also suggested the removal of the Independent Group in Parliament as well as the removal of a provision that allows the formation of Coalition Governments if no party wins on absolute majority after an election.

Tribal Leader and former Temotu politician, Ataban Tropa said experience has shown that the Independent Group holds the balance of power between the government and the opposition in our system.

"In the past, these members have created the fall of many Prime Ministers and their governments. It is important that they should not exist anymore," Chief Tropa said.

The Special Select Committee is currently examining the two bills - The Constitutional (Political Parties) Bill and the Political Parties (Registration and Administration) Bill - and a final draft is expected to be given to the Prime Minister soon.

Dr Sikua is expected to table the bills in the upcoming sitting of parliament.