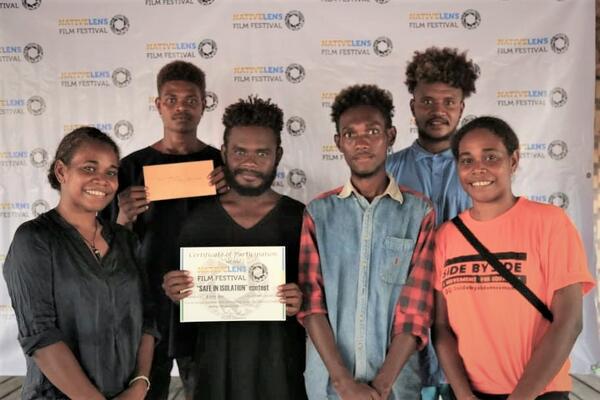 “The film industry in Solomon Islands is still in its infant stage, but slowly it has reached us in the rural communities,” said Riley John, one of the founders of Longa Boys, a group of young film makers based in Belaha, Central Guadalcanal Province.

Riley is a creative young lad with big dreams, he aims to produce big budget films one day, focusing on the many cultural stories on Guadalcanal and other parts of Solomon Islands.

Riley says that they are excited about the future and are keen to push local content further. His group were recently awarded a prize for participating in the Native Lens Film Festival December last year.

He said despite the short notice his team were able to put up a short 5 mins film.

“It was on short notice but I am grateful we managed to get it done on time, the important thing is we share our story, what we see every day in our communities and homes.”

"Life during this pandemic is much more challenging especially with domestic violence issues.

"So our team want to put out the message that everyone should play an equal part during this Covid-19 pandemic.

"We want our story to educate and help everyone understand that we all in this fight together," he said.

He says that putting a short film together requires patience, and it is important to plan what you want to capture on film before any shooting is done.

"Like any other village you see people doing crazy things, some of them is just out of boredom especially for the youths, but others are more serious like domestic violence, which is what we focus on," Riley said.

The group does not have proper filming equipments, they only use android phones and mobile Apps for editing.

Riley is the lead cinematographer and editor, and says that he is largely self- taught, and says he hopes he can inspire other passionate film makers from the rural community.

"Coming to town I normally see videos on Facebook especially those comedy video and from that it inspired me to try as much as possible to do anything like that.

"Participating in Native Lens is an eye opener for me, so I will keep pursuing my dreams on making films.

“I believe that this platform creates a pathway in my passion which I was grateful for.

"I would love to inspire other young people like me who interested in film making in my community to tell their own stories through film," he said.

The Longu Boys are looking forward to createing more content and tell more stories in the years to come.

The Native Lens Film Festival is an annual event which started in 2019. It is organized by two young passionate fimlmakers as well, Regina Lepping and Georgina Lepping.

The event seeks to encourage film makers around Solomon Islands expose their passion in story telling through filming.