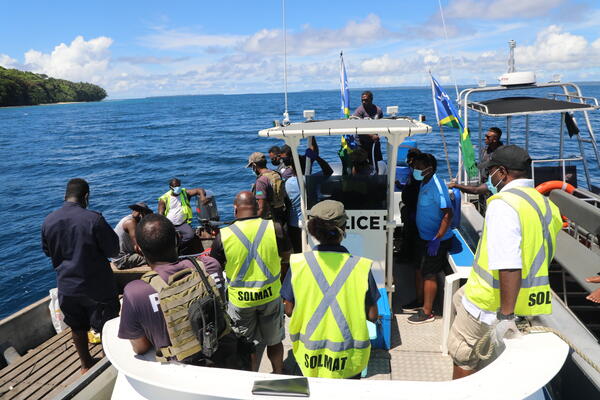 Prime Minister Manasseh Sogavare has acknowledged work done in setting up the teleconferencing facility at the western border.

The Prime Minister said he is pleased to note that the teleconferencing Facility in Gizo, Nila and Taro is now operational.

He described this as a major boost to the country’s preparedness plans at the western border.

Prime Minister Sogavare highlighted this when delivering his nation-wide address on Monday this week.

“The facility has now delivered an effective communication link, which has now provided daily communication between SOLMAT and the National Health Emergency Operation Centre, enabling the teams to discuss detail operation requirements and plans,” he said.

The Prime Minister said operations at the border are conducted in a safe manner to protect themselves and their colleagues from contracting the virus.

“These activities are part of the overall objectives of the SOLMAT team deployed to the western border to support the provincial health emergency operation centre, to strengthen its health system preparedness and response at the border,” he said.

He said the team has completed a two days’ workshop on Standard Operation Procedures for their Emergency Operating Centre and provided guidance on SOPs for Isolation and Quarantine management in Malaita Outer Islands.

“I would like to sincerely thank the SOLMAT team and our many other front liners around the country for their continuous support,” he said.