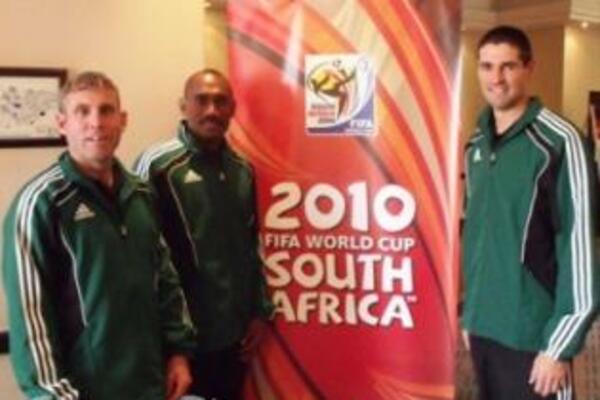 Solomon Island's very first FIFA World Cup referee, Matthew Taro, has arrived in South Africa ahead of the start of the biggest sporting event of the year on June 11.

An email from Taro to the SIFF Media Office yesterday said that the two other Oceania Football Confederation referee arrived in South Africa last Wednesday and are now camping at the FIFA referees headquarters for the World Cup.

Taro said that adjusting to the time difference in Pretoria which is 9 hours behind Solomon Islands time is one of his first concerns. His bigger concern, however, is with Pretoria's altitude whish is about 1300m above sea level.

"Breathing at this altitude is a new experience for me because the air feels thinner and also the temperatures here go very low at night," Taro said.

After his arrival in Pretoria all the FIFA World Cup referees shared an audience with FIFA Presidents Joseph S. Blatter in a ceremony marking the official start of their duties as referees in the 2010 FIFA World Cup.

"We were given our FIFA World Cup gold medals and official World Cup watches that we will use when we officiate in the competition matches," Taro reported back.

Since his arrival Taro has joined other referees in acclimatisation training sessions with special instructors.

Taro also included in his email as a notable mention his meeting with the referee that issued Zinedine Zidane a red card in the 2006 World Cup Grand Final match between Italy and France.

No confirmation has yet been received on which matches Taro will officiate in. However, it is expected that Taro's team will officiate in one or more matches after the first 16 matches have been played.