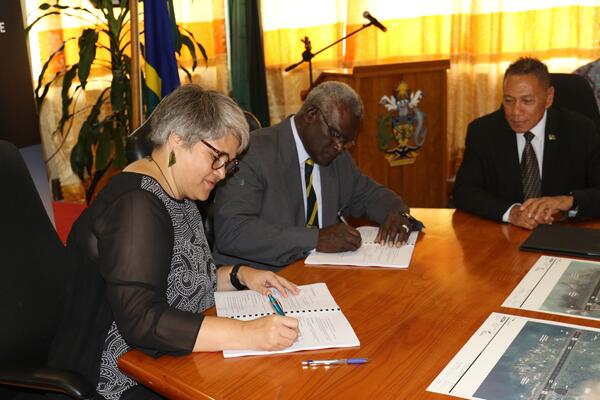 The Solomon Islands Prime Minister, Hon. Manasseh Sogavare said the signing of the construction contract of the Seghe and Taro runways marks another milestone in progressing the implementation of the Provincial Airports Programme.

The signing between the New Zealand Ministry of Foreign Affairs and Trade (MFAT) and Downer New Zealand, took place at the Office of the Prime Minister & Cabinet in Honiara and was witnessed by Prime Minister Hon. Manasseh Sogavare, on Wednesday this week.

In his brief remarks during the ceremony, the Prime Minister said it is a very important moment for the provincial governments and rural dwellers who will start to see priority provincial airports upgraded to improve safety, compliance and all-weather operations, and in this case, Seghe and Taro airports.

“The significant signing brings us closer to the actual implementation of the project,” he said.

He said Stage 1 implementation will see Seghe airport upgraded with terminal and lighting.

The Prime Minister said Taro airport will be upgraded with lighting and refurbishment to the existing terminal.

“I thank and salute the New Zealand Government for partnering with the National Government since 2012 to construct the second international airport at Munda phase I & II, the upgrade of Gizo airport and construction of Noro-Munda road,” he said.

“The Government of Solomon is proud to witness yet another tangible commitment in the development of air transport infrastructure in Solomon Islands which is possible because of the generosity of the people and government of New Zealand and Australia,” he said.

The upgrades will be co-funded by the Governments of New Zealand, Solomon Islands, and Australia.

Work on the runways will begin in the last part of 2021, with extraction and processing of the aggregate and early procurement of key materials and equipment.