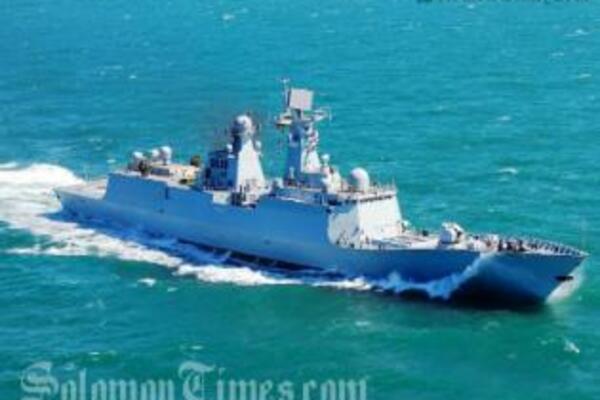 Police Commissioner Peter Marshall today said the two Taiwanese frigates, similar to the one pictured, would be carrying 461 crew on board.
Source: Photo Supplied
Share
Friday, 01 May 2009 09:41 AM

The Royal Solomon Islands Police Force will continue to conduct high visibility policing throughout the weekend as two Navy vessels from Taiwan make a friendly visit to the Solomon Islands.

The Navy ships arrived in Honiara harbour today and are due to depart on Monday 4 May after four days of shore leave for navy personnel.

Police Commissioner Peter Marshall today said the two Taiwanese frigates - one flagship and one a supply ship - would be carrying 461 crew on board.

"We urge the people of Honiara to show these visiting Navy personnel a warm welcome and true hospitality during their brief break from sea for well-earned shore leave," he said.

"Police harbour patrols will provide escort services and additional security to the warships throughout coastal areas between Aola Base, Ranadi and Naval anchorage points."

Mr Marshall urged drivers to be careful throughout the weekend, particularly near the wharf and market areas where more vehicle and pedestrian traffic is expected.

Everyone is urged to heed control signs and directions from Traffic Police near Lawson Tama Stadium on Saturday when the Republic of China Navy provide Tae Kwon Do exhibition, displays and a Corps band performance for the public.

Mr Marshall said Honiara Central Police Station would be the lead group in this operation with more than 100 officers under the command of Chief Superintendent Nathan Ratu.

"The RSIPF will be providing a high profile presence and crowd control in the harbour area, Point Cruz wharf and Honiara City throughout the four-day visit.

"Police will also continue to focus on quashing any drunken and disorderly behaviour around night clubs and bars across Honiara," he said.

The two Republic of China vessels are under the command of Rear Admiral Liu Chinh-Pin who will meet with the Prime Minister today.

An RSIPF Liaison officer will work with visiting naval members on shore patrols to help ensure a responsible, safe and enjoyable visit for Navy personnel.