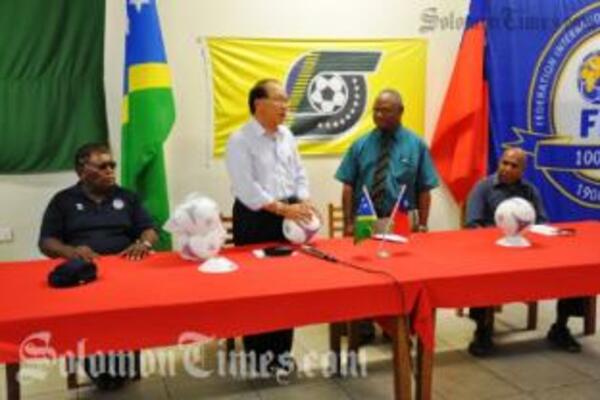 The Taiwanese Government through its embassy in Honiara yesterday officially handed over 200 football balls to the Solomon Islands Government.

The presentation was conducted at the Solomon Islands Football Federation (SIFF) Academy Conference Room in Honiara.

The balls were handed over to the Permanent Secretary of the Ministry of Home Affairs, Fred Fakarii, by the Taiwanese Ambassador to Solomon Islands, H.E George Chan.

The consignment was then passed on by the Ministry of Home Affairs to the Chief Executive Officer of the National Sports Council, David Firisua who completed the handover by presenting the balls to SIFF President Martin Alufurai.

Speaking at the ceremony, Ambassador Chan told the audience at the handover that Taiwan has supported Solomon Islands through sad and happy times and this is one of those happy times.

"Taiwan does not only care only about rural development but also about sports," Chan said making reference to the donation and added that he hoped that this would help young people in Solomon Islands to engage in physical activity for good health.

Mr. Fakarii thanked Taiwan for the donation saying that Taiwan has always been a good friend of Solomon Islands and that this is not their first to support sports in the country. Fakarri also said that it was the intention of Taiwan for the balls to be given to SIFF to distribute.

In receiving the balls Alufurai thanked the Taiwanese government and people for the assistance and said that SIFF will do its duty to distribute the balls.

"Our work is not so much about winning medals and beating opponents. It is also about contributing to community harmony and these equipment will help to keep youth busy and out of trouble," Alufurai said.

Alufurai also took the opportunity to thank the Ministry of Home Affairs and the National Sports Council for recognising SIFF as the official custodian of football in Solomon Islands and for entrusting the donation to the SIFF administration.