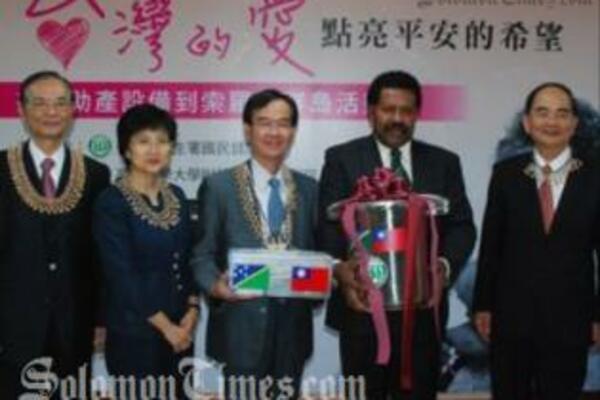 Taiwan's Department of Health (DOH) on Monday pledged to donate customized medical equipment to the Solomon Islands, to help combat the high maternal and newborn death rates in the island country.

Taiwan's Deputy Health Minister Chiang Hung-che said at a press conference announcing the donation that the public health situation in the Solomon Islands is on a par with Taiwan's level 40 years ago, with relatively high death rate for both mothers and newborn babies during the childbearing process.

The donation initiative, which includes 60 sets of autoclaves and sterilization kits assisting with giving birth, was conceived when President Ma Ying-jeou learned about the situation on a visit to the Solomon Islands last year, Chiang noted.

The autoclaves, according to Chiang, are designed to suit the needs of the people on the Solomon Islands, where electricity is often lacking.

The high-pressure instruments have been adapted to generate power from firewood and coconut shells found in the Pacific country, he said.

Also present at the press conference were the head of the Bureau of Health Promotion (BHP) Chiou Shu-ti, and Kaohsiung Medical University Chung-Ho Memorial Hospital Superintendent Wu Jiunn-ren, who donated the equipment to Victor Ngele, the Solomon Islands' ambassador to Taiwan.