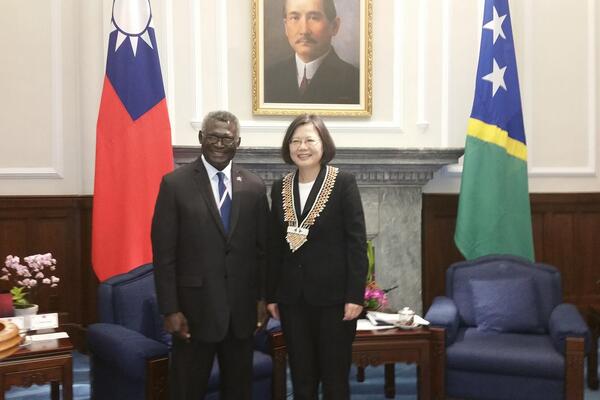 “I look forward to the fulfillment of our desire for enhanced bilateral relations and broadened technical cooperation in the not too distant future,” says PM Sogavare.
Source: pmpresssecretariat.com
Share
Wednesday, 27 July 2016 07:32 AM

Solomon Islands and the Republic of China have committed to taking their bilateral relations and technical cooperation to greater heights.

The two leaders made the assurances in their first ever face-to-face dialogue in Taipei, Taiwan where Solomon Islands Prime Minister Sogavare is currently visiting.

“I would like to especially thank Solomon Islands for speaking up for us (Taiwan) in the international community and staunchly supporting us. Taiwan and Solomon Islands enjoy 34-years of cordial friendship and as Prime Minister Sogavare has repeatedly stated over the years, Taiwan is a friend to Solomon Islands through thick and thin and is committed to taking this cordial relationship to new heights," said President Ing-wen of Taiwan.

The Taiwanese President used the opportunity to also thank Prime Minister Sogavare for his letter of congratulations to her following her successful presidential election and expressed her acknowledgement for the presence of the Governor General, Sir Frank Ofagioro Kabui at her inauguration.

She said these developments are a reflection of the strong ties that exist between Solomon Islands and Taiwan.

President Ing-wen applauded Prime Minister Sogavare as an outstanding Solomon Islands leader for ensuring the successful passage of legislations on land reform and family protection by Parliament soon after his Democratic Coalition for Change Government took office in late 2014.

She also spoke highly of Prime Minister Sogavare as a champion on human rights, climate change, peace, unity and stability for staunchly advocating for the Taiwan’s quest for international recognition and efforts being made by the small Pacific Island states on the issue of global warming as well as taking the initiative to ensuring lasting peace, unity and stability in Solomon Islands.

In response, Prime Minister Sogavare said, “ I wish to take this opportunity to accept your kind offer to enhancing the bilateral relations between our two countries and broadening the existing technical cooperation we have between us.

“I look forward to the fulfillment of our desire for enhanced bilateral relations and broadened technical cooperation in the not too distant future.”

The Prime Minister said the Democratic Coalition for Change Government, which he leads, is seriously working to develop the rural sector with the intention of bringing this sector into the mainstream economic development arena to stimulate growth and thus contribute tangibly to economic growth.

The Prime Minister also touched on the policy intention of the Democratic Coalition for Change Government to attract big investors into Solomon Islands through the establishment of Special Economic Zones, saying that the legislation to legalise the introduction of this initiative is in the final stages of drafting.

He added that the challenge faced by Solomon Islands is about systematically and gradually integrating the formal business sector by getting small Solomon Islands businesses together to become larger business groups, enhancing their potential of entering into business partnerships with big foreign investment groups to ensure successful major business undertakings.

Prime Minister Sogavare also told President Ing-wen that the Democratic Coalition for Change Government is keen on exploring more areas for the exchange of technical expertise between Solomon Islands and Taiwan. Solomon Islands current technical expertise exchange programme with Taiwan focuses only on the fields of agriculture and forestry research.

Touching on the Taiwanese President’s recent election victory, the Prime Minister said Dr Ing-wen’s successful election as the first female president of her country is a clear manifestation of the profound respect that her fellow citizens hold for gender equality.

He said Solomon Islands is facing challenges in developing and progressing the agenda of ensuring more representation of women in Parliament and in other leadership roles and Taiwan has shown the way forward in overcoming the challenges.