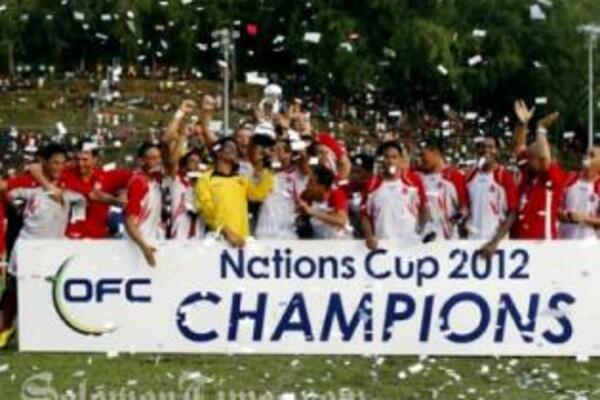 Tahiti will represent Oceania at the 2013 FIFA Confederations Cup in Brazil after edging out New Caledonia 1-0 in the final of the OFC Nations Cup during a dramatic last day of action at Lawson Tama Stadium in Honiara, Solomon Islands.

The title win means coach Eddy Etaeta and his men have created a piece of history by becoming the first Pacific Island team to lift Oceania's biggest prize - Australia and New Zealand are the only prior champions - and they will continue to write themselves into the record books with a debut appearance among the world's elite.

"It's unbelievable, completely incredible," said an emotional Etaeta, who shed tears of joy on the final whistle. "This path started 12 years ago and now we have finally achieved our goal and will go to the Confederations Cup."

The historic triumph was made possible in the 10th minute when a Lorenzo Tehau cross was flicked on by brother Jonathan and found its way to Steevy Chong Hue, who chested it down and volleyed past New Caledonia goalkeeper Rocky Nyikeine.

It may well have been Les Cagous who took an early lead instead when Jacques Haeko broke into the Tahiti box just a few minutes earlier but the big striker was under pressure when he shot and put his effort just wide. New Caledonia had several other good chances to score, the best of these arriving with nine minutes to go when Georges Gope-Fenepej received a Haeko chip at the far post but could only find the sidenetting with his effort.

Tahiti could have extended their lead - particularly when Les Cagous survived a goalmouth scramble just before the break - but a further strike wasn't needed as Chong Hue turned out to be the match-winner.

New Caledonia coach Alain Moizan felt his side's failure to make the most of their opportunities was the main factor in their undoing.

"You have to score goals to win," he said. "Tahiti had two chances and they scored one. We had more chances than them but couldn't score and that was the difference. But we have to congratulate Tahiti, they won all their matches and deserve to be champions."

Etaeta now has a Confederations Cup campaign to prepare for and believes the chance to compete at such a high level will be a massive boost to football in Tahiti.

"We may play against the likes of Brazil and Spain which will be amazing for our country," he said. "We will enjoy this moment for now and then start planning towards the future."

Earlier in the day, New Zealand restored some pride after what has been a hugely disappointing tournament for the defending champions with a thrilling 4-3 win over hosts Solomon Islands in the 3rd Place Play-off.

This was not the match either side wanted to wrap up their respective tournaments with and both coaching staffs took the chance to alter their starting line-ups and give opportunities to younger players to press their claims. The Bonitos left out established stars James Naka, Jack Wetney and Benjamin Totori while the likes of Michael McGlinchey, Shane Smeltz, Chris Killen and Ivan Vicelich also began on the bench for New Zealand.

But if any onlookers thought the All Whites were not taking the game seriously, those doubts were dispelled after half an hour, Ricki Herbert's team racing to a seemingly unassailable 3-0 lead thanks to a quick-fire hat-trick from striker Chris Wood. Two of those goals - Wood's first international hat-trick - came courtesy of the West Bromwich Albion player's head, the first arriving on 10 minutes when Shadrack Ramoni failed to deal with an Aaron Clapham corner and Wood was on hand to nod home from close range.

The lead was extended in the 24th minute as Wood headed in a Marco Rojas cross at the far post and the pair combined again to complete the remarkable hat-trick five minutes later, Wood controlling another Rojas centre before volleying past Ramoni.

It looked like being game over at that point but the hosts reacted by throwing on Totori and came out in the second half a vastly-improved side. Young winger Himson Teleda - given his first piece of action in the tournament - gave them hope when he fired into the far bottom corner from the edge of the area just after the break and the Bonitos were then given a huge helping hand by their opponents.

All Whites custodian Jake Gleeson, standing in for the injured Mark Paston, somehow let an innocuous Totori effort slip through his grasp in the 54thminute to make it 3-2 and put Solomon Islands in touch of a dramatic comeback. Against all odds, the turnaround was capped off in style with a few minutes remaining when Totori tormented defender Tim Myers before smashing a shot into the top corner from an acute angle.

Unbelievably, there was still time for a winner though and, to the dismay of another big crowd at Lawson Tama, it was supplied by New Zealand's Shane Smeltz, who found himself with plenty of space in the box to control and lift the ball over an advancing Ramoni.

"Today was about putting a small boost back in our reputation and getting the World Cup campaign back on track," All Whites coach Ricki Herbert said. "We threw that task to a really young group - it was probably the youngest team I've put on the pitch. There was a massive responsibility for them to step up today and, with all due respect, I think the best team won."

Bonitos technical advisor Laurent Papillon was disappointed to concede a winner after coming back from 3-0 down but was proud of the players' efforts.

"We've shown to everybody that we have the ability to beat teams like these," he said.

The hosts at least earned some consolation by receiving the Fair Play Award while the individual prizes went to Tahiti captain Nicolas Vallar, recipient of the Golden Ball for best player, and New Caledonia pair Haeko and Nyikeine, who were awarded the Golden Boot and Golden Glove respectively.