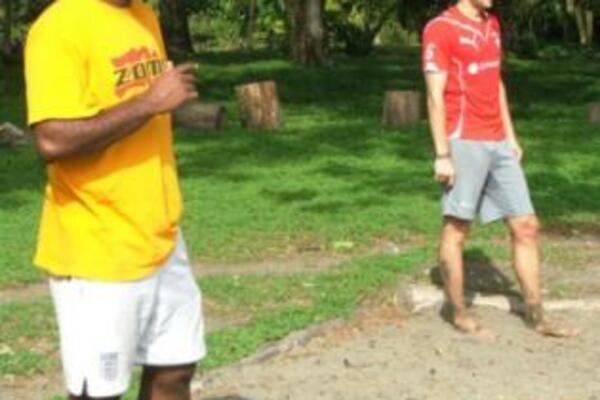 The Swiss Assistant Beach Soccer Head Coach is here in Honiara to assist the Solomon Islands National Beach Soccer team with its preparations for the FIFA Beach Soccer Wold Cup in November.

Davor Ncevic arrived early this week to work with the team on a one-week intensive training program aimed at setting the pace for the team's participation in the World Cup.

The Solomon Islands Football Federation (SIFF) requested a professional coach through the Oceania Football Confederation earlier this year to assist the team after its qualification for the World Cup in August.

The Swiss Beach Soccer Head Coach, Angelo Schirinzi, was first requested but due to his commitments with their national side he appointed Ncevic on his behalf.

According to the SIFF General Secretary, Eddie Ngava, SIFF aims for the team to have the best training possible before it heads off for the World Cup. Ngava also confirmed SIFF plans for the team to arrive one week early in Duabi to allow them to meet up with the coach for further training.

Davor Ncevic says that his objectives for the one-week training program include lessons on the tactical aspects of beach soccer. Some of the main areas that Ncevic is looking at are defence and finishing. 'I am satisfied with the skill level of the players but I think more needs to be done in areas like making use of space as a tactic and other advanced team techniques,' Ncevic said adding that he feels that the players should make more movements in their game.

Bilikiki Team Manager, Rueben Oimae, says that he is very happy with arrival of the professional coach from Switzerland. "I think the team will benefit a lot from his work here even though it will only be for a very short time," Oimae said.

The team is in camp this week and this allows them to have two training sessions per day. This allows more time for Ncevic to work with the boys and address his objectives with the team.