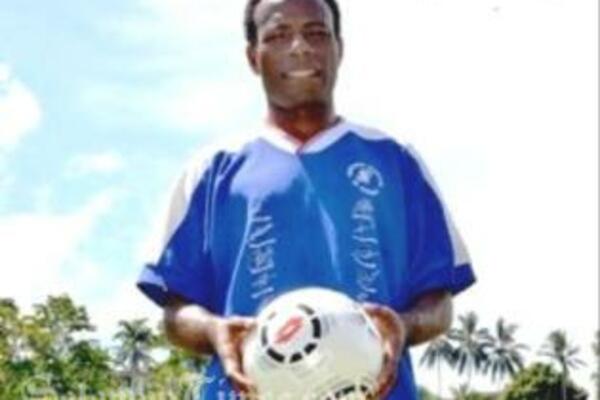 "Coaching is not easy though. When you make a decision it is up to you and you're the one who gets the blame when the team doesn't win. It is hard when things are not going your way."
Source: Photo Supplied
Share
Tuesday, 17 January 2012 10:28 AM

The remarkable playing career of Batram Suri may finally have come to an end but the last words of his footballing story are far from being written.

The former Solomon Islands international hung up his boots at the end of last season after spending over two decades terrorizing defenses across the Pacific. He is now part of a coaching duo with Moses Toata at S-League club Solomon Warriors, who finished runners-up in the previous campaign and currently sit third in the table.

"We are not doing too badly," Suri says.

"Coaching is not easy though. When you make a decision it is up to you and you're the one who gets the blame when the team doesn't win. It is hard when things are not going your way."

The 40-year-old wrapped up his playing days - which began at senior level way back in 1990 with hometown club Laugu - in fitting fashion by featuring in the final of the 2011 O-League. Suri was then on the books of Vanuatu side Amicale, who performed above expectations to make the final but could not complete the fairytale and were defeated by New Zealand's Auckland City.

Aware that his days as an on-field star were coming to an end, Suri lent a hand to Amicale coach Luke Eroi throughout the season and says it wasn't the first time he had helped out in that regard.

"When I was playing I helped coach a few clubs," he says. "I played for the Nadi district in Fiji and also coached them for a few months. Then with Amicale I helped the coaches with the training sessions and that sort of thing."

Suri's goal now is to use the knowledge and experience gained from his lengthy career to become an accomplished coach and believes there is a lot of young potential in Solomon Islands to bring to fruition.

"Most of the young players have skill but that's it - there is still a lot more to learn besides skill," he says.

"Some of the young Solomon Islands players are very good but when people tell them that their heads start to get bigger and they start losing their focus and concentration. That's why the youth players need to change their attitude, I think some of them have an attitude problem. I have seen a few good young players who should be playing for overseas clubs by now but their attitudes are wrong."

Suri's own hard-working attitude saw him carve out an impressive career that took in spells with clubs in his homeland, New Zealand, Fiji, Tahiti and Vanuatu, where his run finally came to an end with Amicale.

His success overseas broke new ground for future Solomon Islands star to cover - the likes of Commins Menapi and Henry Fa'arodo followed his example to make names for themselves on foreign shores - and he is regarded as one of the finest players ever produced in the Pacific Islands.

Despite enjoying a career featuring so many highlights, Suri says it is not difficult to single out his most memorable period.

The fleet-footed striker spent time as a professional with the Football Kingz - New Zealand's representative in the former Australian national league - at the turn of the century and says it was an experience he will never forget.

"How we did things was so different to being a semi-pro or amateur player. I enjoyed being with professional players so much, especially the ones that had been brought in from different countries.

"Turning professional was a moment I had always aimed for. Players from the Solomons had always seen the national team as the highest level you could reach so it was great to show that you can go further."

Suri's spell at the now defunct Kingz came about when brothers Wynton and Shane Rufer were at the coaching helm and had noticed the prodigious skills of the Nelson Suburbs import.

"They invited me for a trial and there were about 10 or 12 of us," Suri recalls. "There were a few from Australia but just myself from the Solomons. I did well and they ended up signing me."

Suri hopes plenty more Solomon Islanders will also see their dreams of becoming a professional come true and is keen to help them get there.