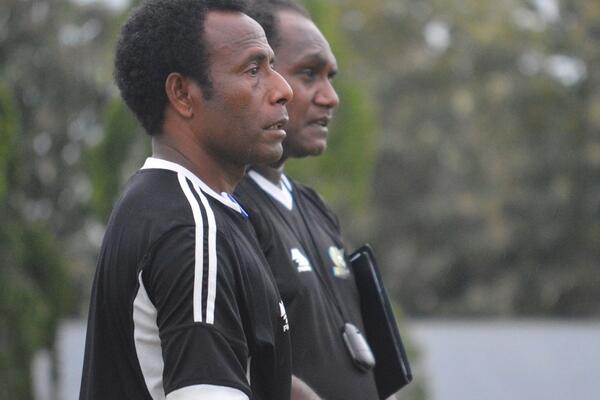 A reunion between two legendary Oceania footballers will take place when Solomon Islands play New Caledonia on second day of the 2018 OFC U-19 Champions in Papeete, Tahiti this afternoon.

Former AS Dragon forward Batram Suri and Solomon Islands coach will be on the one side while Felix Tagawa, a former Tahitian international and AS Venus striker, will lead New Caledonia.

The Solomon Islands legend was playing for AS Dragon from 1998-1999 in Tahiti’s top division during its glory days where he faced off with Tagawa on a number of occasions as rivals.

Both Suri and Tagawa ended up playing in Australia’s top flight, prior to the founding of the A-League, during the peak of their respective playing careers.

They’re also both making their debut as national team coaches, showing their

The Solomon Islands coach recalled his rivalry with his New Caledonian counterpart during their playing days.

On the international stage, Suri could vividly remember a 2-1 defeat to Tagawa’s Tahiti side in the 1995 South Pacific Games gold medal match.

“The most memorable match was when Tahiti beat us in the final of the South Pacific Games here in Tahiti.”

However, Suri has vowed to leave their friendship aside as they guide their respective countries in the all-Melanesian clash this afternoon

“He’s a good friend of mine too, but for the 90 minutes we need to be enemies, in 90 minutes we have to be separated but I look forward to meeting him again, he was a good player.

“I was surprised he wasn’t a coach for one of the youth teams here in Tahiti because he was playing for Tahiti back then.”

“We were colleagues outside of the field, he was playing at AS Dragon and me at AS Venus. We won quite a few matches against AS Dragon,” Tagawa said.

“It’s always the challenge of being competitors but that’s sport really, it creates competition, the challenge, you have to defend your club, in the national team I was wearing the red shirt, and him the shirt of Solomons.

“We always had that confrontation, and they always have a technically gifted team. We have the tactical advantage, with a good amount of diversity in our players, we have Caledonians, French, the game is mixed.

“We’ve been able to link the two groups and we’re strong in attack, we’re potent. We’ll keep trying to leverage that. These are really big games coming up, it’s different now.”

In respect to his opponent, Tagawa paid tribute to Suri’s qualities as a former player and coach.

“Batram is a fine technician, midfielder and goal scorer. He’ll bring his tactical experience, he was a great player and now he’s a coach.

“He’ll certainly bring something to the encounter on Monday, I think it will be a good, rough match. It’s up to us to put our tactical strategy in place so we can take the advantage,” The New Caledonia coach added.

New Caledonia and Solomon Islands will open the day’s action of Group B at Stade Fautaua in Papeete, Tahiti at 3pm.