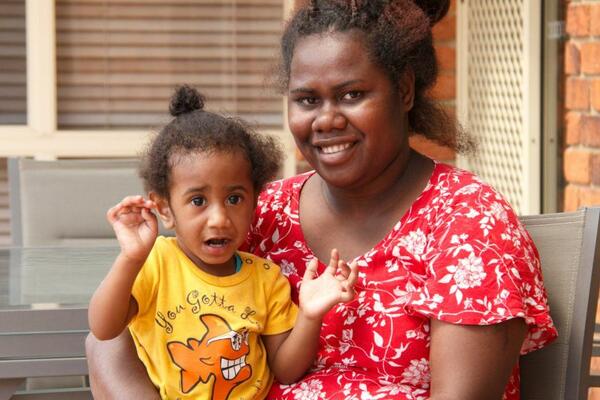 Vincent and his mother Ms Matesonia arrived back in the country over the weekend.
Source: ABC News: Nick Haggarty
Share
Monday, 26 October 2020 08:11 AM

Not yet two years old, Vincent Toto's life was set to end before it really began.

But a mother's love, goodwill from 3,000 kilometres away and an unforgettable year in a foreign country have saved the Solomon Islands boy from certain death.

"If he was left in Honiara, he would have been dead in a few days to maybe a month," paediatric surgeon Celine Hamid explains.

"Because these kids are born without the food pipe, which is the oesophagus, they drown in their own saliva.

"They aspirate. They get lung problems."

Dr Hamid, who works at the Canberra Hospital, says Vincent's life came to be in her hands after he was born in Honiara with a complex anomaly: his oesophagus was not connected to his stomach, leaving the child to waste away helplessly.

"There are no paediatric surgeons in Honiara or most of the Pacific countries. Fiji has two," she says.

"So what happens is that when the baby is born, the general surgeon is called to check the child … Then they contact us [at the Canberra Hospital], pictures are sent, and we contact Rotary."

Rotary Oceania Medical Aid for Children (ROMAC) has saved dozens of Pacific Islanders by bringing sick babies and children to Canberra for critical care, which is donated by the hospital under a memorandum of understanding.

Vincent underwent three significant surgeries, dozens of gastroscopies and ended up in the neonatal intensive care unit on a few occasions.

After 16 months of treatment in Canberra, he has become well enough to eat — with an appetite that draws him to the backyard veggie garden to munch on snow peas.

His 23-year-old mother, Cosinta Matesonia, endured fear and uncertainty as she fought to keep her malnourished son alive following his birth in May last year.

But she is now ready to fly home with a thriving toddler.

"I'm just happy for Rotary to help, so I just want to say a big thanks to the Rotary club and the doctor who helped my baby to get better," Ms Matesonia says.

She says it is a huge relief to see Vincent can now eat.

Retired nurse who can't say no to children in need

"I will always have any children who need some help," she says.

"I've been looking after children for over 15 years now and they just become our family. So it was a very easy decision.

"I can still help these kids. My skills come into fruition from my nursing."

Mrs Goldstraw began to weep as she spoke about putting Vincent and his mother on a plane home after his treatment ended — the boy learnt to walk, talk and play under her roof, and even called her "Grandma".

"I mean, it's been a long time. I don't have any grandchildren yet. I have one on the way," she says.

Mrs Goldstraw says there are many more children that need to be saved from needless death.

"I heard the other day one little girl just couldn't have a heart operation because we couldn't get her over here … she died. She was from Papua New Guinea and just four days old.

"I'd love to think that other states in Australia, other hospitals, could have arrangements to bring over these children."

Australia 'has a duty' to help in region, surgeon says

Dr Hamid, who has travelled to the Pacific Islands to perform many surgeries, agrees Australia should offer more as an act of goodwill in the region.

"I think Australia has a duty to our neighbours. They have a lot of problems, even public-health problems which can be fixed so simply if they had the resources and the support."

Dr Hamid was one of many Canberrans who farewelled Vincent and Ms Matesonia over the weekend, leaving the paediatric surgeon to reflect on her "gratifying" work.

"I've seen him grow and become normal — from a really malnourished, small child with congenital problems to a boy who has a future," she says.

"Because he came here, he turned one in May, he's an active cheeky little child … his milestones are all developing."

Ms Matesonia and her son arrived in the Solomon Islands on Saturday — a country Vincent does not yet know, but one in which he now has a future.