Summit Looks at Adoption of Federal Constitution in Solomon Islands 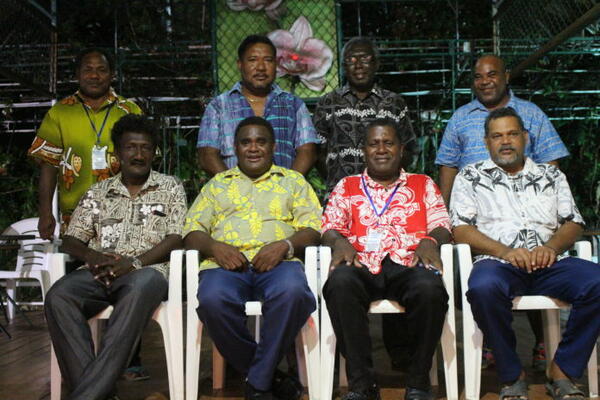 Minister Tome, sitting at the centre, with the Provincial Premiers at the welcome function.
Source: OPMC
Share
Monday, 07 November 2016 10:16 AM

Minister for Provincial Government and Institutional Strengthening, Hon David Tome said matters of discussion at the one-day summit between the Prime Minister and Provincial Premiers will assist in hastening the proposed adoption of a Federal Constitution.

The summit called for by the Prime Minister, Hon Manasseh Sogavare in his capacity as the Minister responsible for Constitutional Reform will be held at the Cabinet Chamber.

Speaking last night at a welcome function for the Premiers at the Honiara Hotel, Minister Tome said, “As the Minister responsible for Provincial Government, I am delighted to welcome you to Honiara for an important Government business and that is to have a conversation with the Prime Minister on the Draft Federal Constitution.”

“I believe the subject matters you will discuss will greatly assist the hastening of the adoption of the Federal Constitution.”

It is after the State Constitutions are in place that the Provincial Government Act will be replaced by a new power relationship specified in the Draft Federal Constitution, he added.

He further explained that as a creature of the current constitution, the Provincial Government System will be done away with when the new constitution comes into effect.

In that context, Minister Tome said the work the Premiers have been doing and will continue to do in making sure that the Federal reform succeeds is ‘absolutely’ critical to a country (Solomon Islands) that prides itself in its cultural, ethnic and island diversities.

He then urged the Premiers to work together to achieve a system of government that the people of Solomon Islands have been aspiring for in the last ‘several decades.’

“Let us end the search for autonomy or traditional governance by adopting a federal constitution that will help us achieve such aspirations,” the Minister for Provincial Government and Institutional Strengthening added.