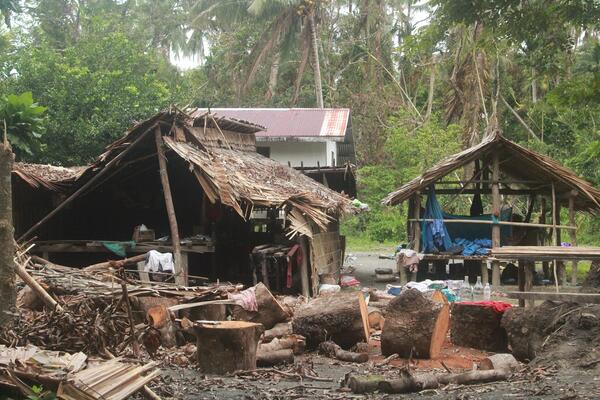 Sarah Tito said mothers are trying their best to provide for their families. She said with no gardens, this has proven to be very difficult for them.
Source: Jeremy Gwao
By Jeremy Gwao
Share
Wednesday, 22 April 2020 14:46 PM

Villagers in North Guadalcanal are frustrated their livelihood was shattered by cyclone Harold.

From Suaghi village, Samson Tito said over 400 people from around the village have experienced damages from cyclone Harold.

Tito who represents the Village Disaster Responsible Committee said it had been a couple of weeks now since cyclone Harold. He said people are still to rebuild their lives.

“People in the village are now living with relatives, as they slowly rebuild their home that was destroyed by cyclone Harold,” Tito said.

He said a majority of the villagers have to change their daily meal routines as all their gardens have been washed away with some covered with thick mud.

“Most only have breakfast and dinner. In the afternoon the children will just find grow coconuts while waiting for dinner”, Tito said.

Speaking on behalf of the Suaghi women Sarah Tito said as mothers, they are trying their best to provide for their families. She said with no gardens, this has proven to be very difficult for them.

“We cannot do any gardening as there is still a mass clean up taking place.now we are only surviving on bananas and coconuts."

At the same time Samson Tito said there are 18 houses that were damaged from TC Harold.

He said cyclone Harold was the biggest cyclone to have been experienced by the villagers from Suaghi.

Meanwhile the latest report from NDC says eight percent of the total population of Guadalcanal were affected by TC Harold.

Initial damage assessment was completed by 19th April and a report of the assessment is currently being compiled.

NDC says 12,580 people are in need of emergency supply and other assistance on Guadalcanal.

Emergency relief or non-funded items were said to be distributed to communities on Guadalcanal, starting on the 17th of April 2020.