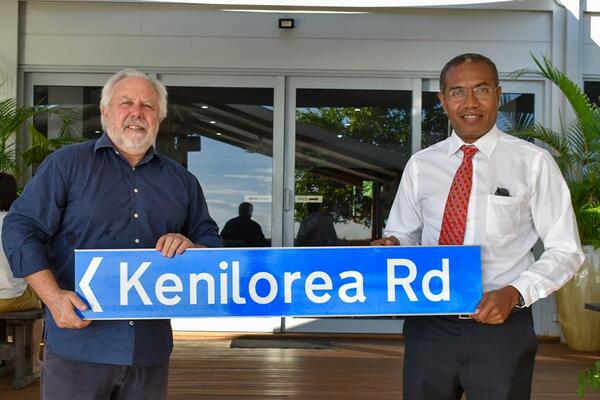 One of New Zealand’s newest streets is to be named in honour of Solomon Island’s first Prime Minister Sir Peter Kenilorea.

Kenilorea Road in Pukekohe is part of a new subdivision on the site of Wesley College, the South Auckland school that Sir Peter attended in his youth on a New Zealand government scholarship.

A number of roads within the subdivision have been named in honour of students who attended the school and then went on to make significant contributions to their countries.

When New Zealand High Commissioner to the Solomon Islands Don Higgins heard about the plans for the street name he contacted the Wesley Trust, who very generously assisted his office to source a copy of the street sign.

The street sign was presented to Sir Peter’s son the Honourable Peter Kenilorea Junior, who also attended Wesley College on a New Zealand government scholarship before going on to complete a law degree at the University of Waikato.