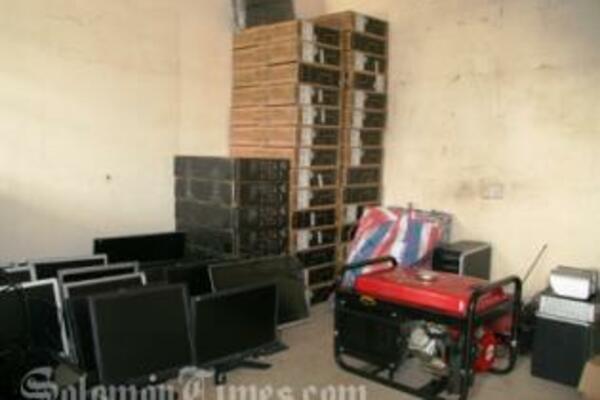 Detectives from the Honiara City Police executed a search warrant on Tuesday 19 January 2010 at approximately 8.30am, at a Motel in Honiara and seized a large number of goods believed to have been stolen.

A 34 year old man was arrested in relation to the alleged stolen goods. He was taken to court yesterday afternoon and has been remanded in custody.

Detectives believe that they may have recovered stolen property from at least four separate burglaries occurring from late last year to one that occurred about three weeks ago.

Honiara detectives are urging business houses and individuals who may have lost valuable items such as computer screens (monitors), hard drives, modems, laptop computers and other electrical equipment such as power-boards and generator to come forward and see if they can genuinely identify and claim ownership on any of the recovered items.

Acting Police Commander for Honiara City, Superintendent John Lee Kanabaea was pleased with the successful result of the operation.

"This has been an excellent result as we believe that we can return the property belonging to a number of people who have been victims of theft and burglary," he said.

"The Criminal Investigation Division of Honiara City Police and other RSIPF units will continue to target theft and theft related offences in and around Honiara as we do not tolerate people stealing property from others in our community," Superintendent Kanabaea said.