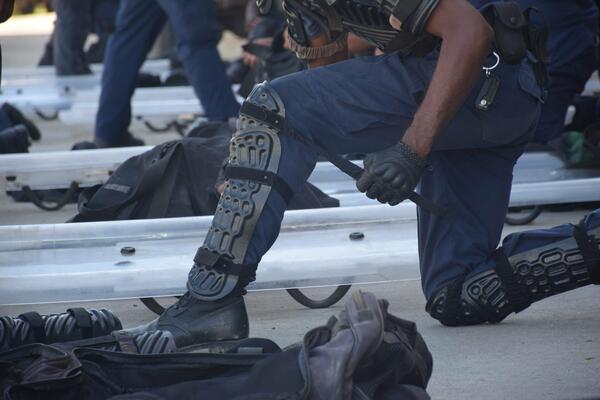 Meanwhile, the Prime Minister has also announced that the government has deployed the Correctional Services of Solomon Islands to assist with security at the field hospital and to complement existing security arrangements in other quarantine facilities.
Source: File: RSIPF
Share
Wednesday, 28 October 2020 07:31 AM

There will be no lockdown despite the announcement of the country’s four new positive COVID-19 cases.

Despite the four new cases from our soccer players that arrived from United Kingdom, the Prime Minister assured the nation that the virus is contained within the isolation facilities and the quarantine centers.

Prime Minister Sogavare said there was no breach that would put the public at risk.

“We will wait to see the rest of the tests that are being done today, and the second round of tests later in the week to make an informed decision on further actions that may be needed going forward,” he said.

Prime Minister Sogavare assured the nation that there is still no need to worry about community transmission.

“It is the only ground upon which a lock-down will be appropriate for the sole purpose of enabling our front-liners to undertake contact tracing within the community,” he said.

The Prime Minister said he has been assured that our dedicated front-liners vowed not to let that happen.

However, the Prime Minister reminded all people living in Honiara city that all illegal markets that are within close proximity to all quarantine and isolation stations must close with immediate effect.

He urged the Honiara City Council, Guadalcanal provincial government and the RSIPF to work together to enforce the closures immediately.

Meanwhile, the Prime Minister has also announced that the government has deployed the Correctional Services of Solomon Islands to assist with security at the field hospital and to complement existing security arrangements in other quarantine facilities.