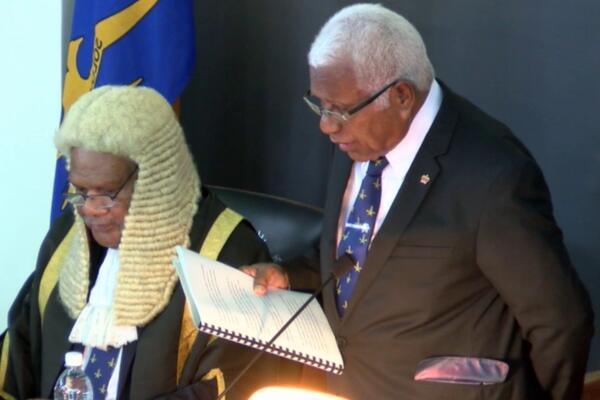 The declaration was made by the Governor General Sir David Vunagi following recommendations from Cabinet.
Source: Tideline Solomons
Share
Friday, 25 March 2022 11:57 AM

His Excellency the Governor General Sir David Vunagi proclaimed a State of Public Emergency (SOPE) exist for Solomon Islands. The declaration is made following recommendations from Cabinet.

The SOPE is in accordance with Section 16(2) of the Constitution and in light of an assessment conducted by the Government of the continued threat posed by COVID-19.

The Cabinet having received advice from the relevant authorities recommended to His Excellency, that a state of public emergency still exists in Solomon Islands as risks associated with COVID 19 community transmission is a matter of national security.

However, if Parliament by way of a resolution with the support of two thirds of Members thereof decided to extend that period, then it will be extended for a period of 4 months as provided for by the Constitution.

His Excellency signed into effect the declaration and was gazetted under the Proclamation and Emergency Powers (COVID-19) Regulations 2022.

It is understood that the Bills and Legislation Committee is yet to present its report on the Public Health Emergency Bill.