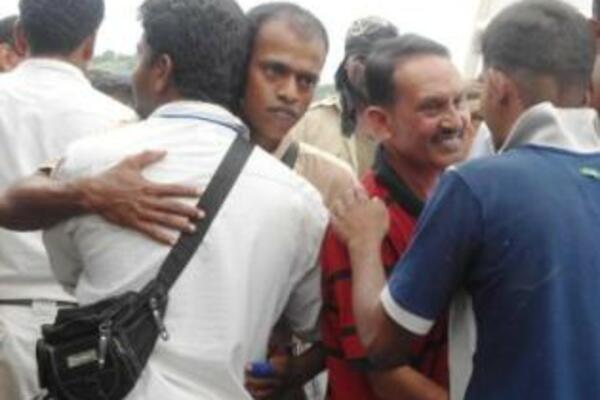 The hugs, the patting, smile and separation marked an emotional end to contractors from Sri Lanka who helped construct the new modern Gizo hospital in the Western Province of Solomon Islands.

The farewell was moving and heartbreaking, "you can feel and sense the real human touch of love and what companionship is all about, even you forget where you come from," remarked Guavo Thomson, a local former worker.

For the last several months two hundred overseas skilled labour forces gradually left the shores of Gizo. Gizo town was their home for the last 14 months and these were the last 18 to leave.

As the work neared completion foreign contractors from Japan, Korea, Philippines, Vietnam and Sri Lankan were all farewelled by the Gizo community at the tiny Gizo hotel jetty wharf.

"The practice will be greatly missed," said one local worker. "We have been like brothers, but they left us with such a big bonus, we have gained new and wide experience and new skills in such huge construction project."

The majority of skilled labours engaged by Kitano Company are from Sri Lanka, a country hugely popular for their World famous Ceylon tea. Some of the returning Sri Lankan nationals say that this would probably be the last time they see each since they all come from different parts of Sri Lanka.

One of the returning Sri Lankan workers says that they are blessed since during the whole construction period there was never a major accident, something that is common in any construction project.

"The morning briefing and safety talk each morning was really beneficial when you look back as alot of dangers and risk involves in construction work and the company supervisors and management must be commended well for this," says Tony Lea a former local Malaitan worker.

The inaugural official opening of the hospital is likely to take place early next year.

The sixty two bed hospital will cater for those in the Western Province and those nearby. It will be the second referral hospital for the country.

The multi-million dollar hospital is a gift from the Government and people of Japan.