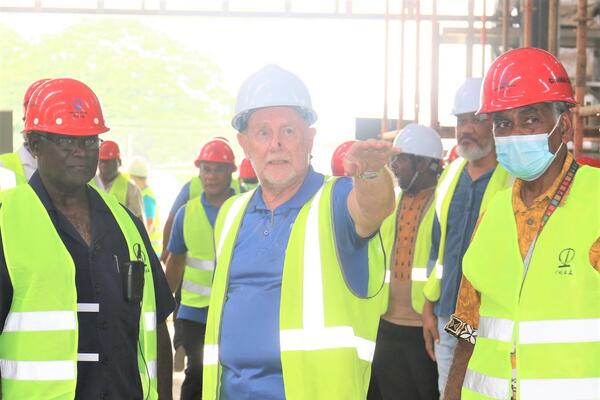 Prime Minister Manasseh Sogavare has visited the Solomon Islands Institute of Sports (SIIS) to witness first-hand, the progress on the work of the first-ever dedicated investment to Sports Development in Solomon Islands.

The Prime Minister was also accompanied by his Cabinet Ministers and other Government MPs.

Speaking during his brief visit, Prime Minister Sogavare said Solomon Islands have the talents in all the sports that will be played during the 2023 Pacific Games.

However, he said what the country had been lacking is a ‘sports development facility and a dedicated sports development programme’ to further develop, harness and sharpen the skills of our athletes to be competitive.

“What we witness here today explains a key reason why this country had not been performing to our potential in national, regional, and international sporting events and competitions, simply, we had not taken sports development as seriously as many of our neighbouring countries,” he said.

Prime Minister Sogavare said that explains why even much smaller countries have out-performed Solomon Islands, the third largest country in the Pacific Islands in regional and international sports competitions.

“What we witness here today is the start of our journey in ‘dedicated sports development’ in Solomon Islands. This facility will support sports development programs for at least 20 of the 24 sports listed in the 2023 Pacific Games,” he said.

He said equipment list is being finalised and will be ordered shortly.

Prime Minister Sogavare also acknowledged the leadership under NHA for the vision that will leave behind a legacy for sports development in this country.

He said it will be a legacy that for the first time put our sports people, our youths at the centre of our human development aspirations.

Prime Minister Sogavare said the facility is funded by the national government through the NHA.

“By the time it is completed, it will cost around 20 million SBD representing one of the best investments this country has made because its impact will live on, and it will be enjoyed every day by our sporting talents in the country,” he said.

The facility when completed will have its own solar installation to power the electrical needs of the facility long-term.

“We will also have a 70 metre by 30 meters training field and a 4-6 lane 60-meter sprint training track. We will also install a temporary swimming pool for conditioning training using a 40 feet container,” he said.

Prime Minister Sogavare said the Government has also reached out to our development partners, Australia, and the People’s Republic of China to assist with equipping this facility and to finance the 2,000 square metre office complexes [the National Sports Haus].

“Once all these facilities are completed, Solomon Islands will have one of the best, if not the best National Institute of Sports in Pacific Island countries. The National Sports Council of Solomon Islands will inherit and manage this facility. It is a key legacy for the 2023 Pacific Games,” he said.

Meanwhile, the Prime Minister has acknowledged the General Manager of the CCECC and his team for the wonderful work done so far to build the facility for Solomon Islands.

“Today we are 852 days away from the Games. With God’s help, we will succeed,” Prime Minister Sogavare said.

The Prime Minister also briefly visited the Futsal Stadium site, which the construction has already kicked off.