Speaking out on Climate Change 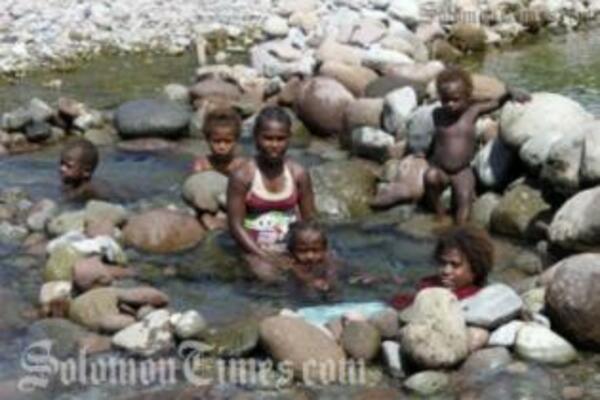 Women and children in a makeshift bath on Guadalacanal.
Source: trust.org
Share
Tuesday, 24 April 2012 08:36 AM

In the male-dominated society like that of Solomon Islands, men make the decisions and women tend to the children and prepare food.

Yet it is women and children who will suffer the most from the impacts of climate change.

Coastal communities living in Melanesia, which includes the Solomons, Papua New Guinea, Fiji and Vanuatu, are already facing rises in sea levels which could affect their livelihoods, food security and ultimately lead to their permanent displacement.

As homemakers responsible for the family's welfare, it is women who are at the frontline in responding to changes in the availability of food and water.

But in such highly patriarchal societies, how can their voices be heard and included in decision-making?

The answer lies not in singling women out to empower them - which could create a backlash - but in being inclusive and allowing everyone to participate, said Annisah Sapul of The Nature Conservancy, a U.S.-based conservation organisation.

"We went into the communities recognising that we have sensitive issues about power within the community structure," she told AlertNet at the sixth International Conference on Community-Based Adaptation to Climate Change in the Vietnamese capital Hanoi.

"We appreciated that we had to do it differently so that's why making (the programmes) participatory was appealing to us."

As a Melanesian woman herself, it was a challenge to sell her organisation's projects. "In Papua New Guinea it's not normal for a female to enter a community, stand in front of people and talk to community leaders," she added.

The Nature Conservancy, which works with the coastal communities of Manus in Papua New Guinea and Choiseul in the Solomon Islands, is using three tools to bring out women's voices, Sapul told AlertNet during the week-long conference which ended on Sunday.

Firstly, it is helping communities make three-dimensional models of their homelands allowing the older generation to reflect on how the landscape has changed over the years and to pass on their knowledge to younger generations.

Sapul said making the models gave people insight into the region's natural weather and eco systems and helped them understand how climate change is causing the changes they are seeing.

Very importantly, it has allowed women to take part in developing the model and to describe how climate change is affecting them.

A second project has involved getting women to make videos in which they share their concerns. These are shown in the community and used to raise policy makers' awareness of local worries regarding climate change.

Sapul and her colleagues have also been conducting household interviews, allowing them to talk to the women.

She believes the women they are working with are now more confident in sharing their views and taking part in decision-making.

"When we meet males who've been in the society for a very long time it's really difficult to tell them that we want to work with (women) as well because they've always been the ones who made decisions," she said.

The trick is not to dictate to them, but to let them come to their own conclusions. Sapul said when she and her colleagues ask about issues that affect everyone the men often realise they're not necessarily best placed to answer and that women also have a role to play.

"Our culture is the challenge that we have to deal with, but it's also our identity," she added.

"But we recognise that we're living in a changing environment where all will be affected, not only the men but the children and the women."