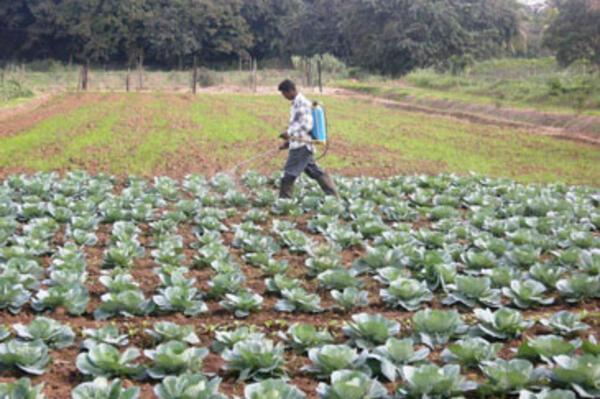 When laboratory analysis showed that insecticides used by farmers to control the insect pest of Brassica oleracea (cabbage) are no longer effective, farmers began increasing the dosage. This was revealed in a pesticide forum attended by farmers, pesticide retailers and agriculture officials.

The forum was conducted by the Secretariat of the Pacific Community (SPC) with assistance from Fiji’s Ministry of Agriculture on 11 and 12 June.

According to Fereti Atumurirava, SPC’s Integrated Pest Management Officer, farmers have resorted to increasing the amount of insecticide mixed into the sprayer tank, as well as the number of sprays per week.

‘While spraying two to three times a week enables them to sell the crop, they are forgetting the impact of increased chemical residue on consumers,’ said Mr Atumurirava.

To combat this, a joint project run by the Australian Centre for International Agricultural Research (ACIAR) and the United Nations Food and Agriculture Organization (FAO) is currently being implemented to create more awareness amongst stakeholders and look into other options for reducing chemical usage on cabbage production. SPC is coordinating the activities and providing resource people.

‘The key issue here is the reduction of pesticide use in vegetable production in order to make vegetables safe for human consumption and to protect the ecosystem. This can be done by introducing the insecticide resistant management strategy,’ Mr Atumurirava said.

He added that this strategy is one of the drivers in reducing the use of pesticide that also includes the use of biological insecticide (Bt).

‘The idea will involve the rotation of three unrelated insecticides in one season to prevent resistance building up amongst the pest population,’ he explained.

‘A new insecticide called Bt (a biological insecticide) will be introduced as one of the three.’

Mr Atumurirava said that farmers interested in using Bt can contact the Ministry of Agriculture or pesticide suppliers for more information.

The number of pesticide dealers present in the forum was of significance, as their cooperation enables farmers to purchase the insecticides that are required by the insecticide resistant management strategy.

A farmer survey conducted in 2012 in the Sigatoka Valley showed that most insecticides were used for tomatoes, eggplant and English cabbage. Making these vegetables safe for human consumption is crucial and such a forum is targeted to bring about change.

The ACIAR project is called Strengthening integrated crop management research in the Pacific Islands in support of sustainable intensification of high-value crop production and FAO project is called Capacity building to promote adoption of techniques to reduce hazardous pesticides use in Pacific Agriculture. The two projects have joint activities to resolve the chemical residue problem.

Source: Secretariat of the Pacific Community