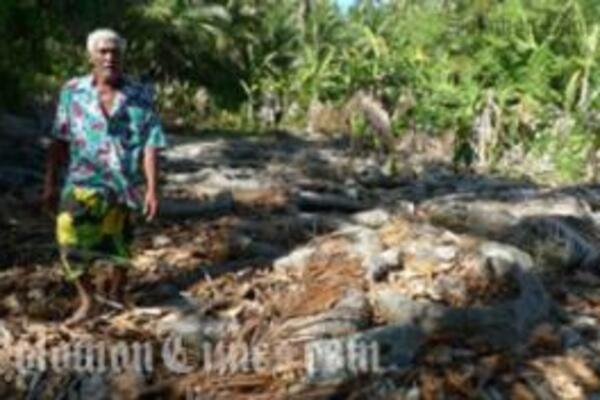 A senior government official from Tuvalu has called for the Secretariat of the Pacific Community's continued assistance with enhancing food security in the low-lying atoll nation, one of the worst affected by the impacts of climate change in the region.

In 2011, Tuvalu was faced with a drought that had a severe impact on the task of growing fruit and vegetables, which was already difficult on some of the islands due to saltwater intrusion.

Speaking at the annual meeting of SPC's governing body, which is under way at the organisation's headquarters in Noumea this week, Mr Temate Melitiana, a senior official in the Tuvalu Prime Minister's Office said, 'Tuvalu values SPC's role and assistance in many areas where SPC has a comparative advantage.'

Tuvalu and other Pacific Island countries and territories (PICTs) are benefitting from SPC's Centre for Pacific Crops and Trees (CePaCT), which is providing them with planting material from its 'climate ready' collection, that is, plants that show tolerance to drought, salt and water-logging.

This year, the centre has distributed much-needed planting material for banana, cassava, swamp taro, sweet potato, taro and yam to 18 PICTs from the 'climate ready' collection.

A recently conducted independent expert review of the organisation commended the centre's work, which all of SPC's 22 PICTs, especially atoll countries, benefit from.

The 42nd Committee of Representatives of Governments and Administrations (CRGA), the annual meeting of SPC's governing body, started on Monday and runs until 16 November 2012. It brings together government representatives from SPC's 26 member states, and observers from regional and international agencies.