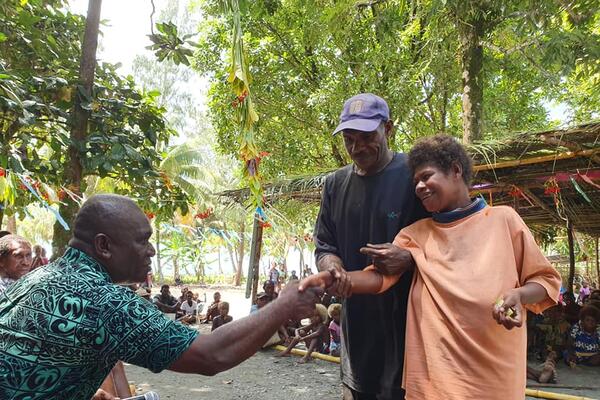 Seleso, a first time National MP, took on board with him, working class South Guadalcanal people in Honiara to be a part of his ‘think tank’ committee.
Source: Supplied
By Georgina Kekea
Share
Monday, 08 February 2021 09:15 AM

The MP for South Guadalcanal will be profiled in a webinar program initiated by the International Republican Institute (IRI).

IRI, an American nonprofit, nonpartisan organization is committed to advancing freedom and democracy worldwide. Founded in 1983, IRI links people with their governments, guides politicians to be responsive to citizens and motivates people to engage in the political process.

MP, Rollen Seleso was one of the few selected in the Pacific region to share his concept of development for his constituency in South Guadalcanal.

Speaking to Solomon Times Online Seleso says his time in the provincial government as a member of the provincial assembly has helped him identify the issues he believes are needed to address in order to move South Guadalcanal forward.

“As you know, we live in isolation on the island of Guadalcanal. There are a lot of challenges faced by my people for many years now”, Seleso says.

He says after two terms as a provincial member, as soon as he won the 2019 national general election he did not waste time in carrying out his plans for his constituency.

In July 2020, he launched the first development plan ever for the south Guadalcanal constituency and the Solomon Islands as a whole.

“Before we came up with the development plan, we did consult with the people on what they need”, Seleso says.

The sectors covered in the development plan includes agriculture and livestock, social infrastructure and economic infrastructure that includes road, air and shipping services.

Other areas are in energy, communication, health and sanitation, fisheries, tourism and climate change and disaster development.

Seleso, a first time National MP, took on board with him, working class South Guadalcanal people in Honiara to be a part of his ‘think tank’ committee.

“We are all people from South Guadalcanal who have the best interest of our people at heart. We have seen the lack of progress in our constituency and we are also concerned”, John Stewart MPA for Duidui ward in South Guadalcanal told Solomon Times Online.

With the support of his ‘think tank’ committee, they were able to launch the development plan that outlines the vision, mission, strategies, goals and objectives of the South Guadalcanal constituency till 2023.

It is understood that the concept and the process is what greatly attracts IRI to Mr. Seleso.

“We want to profile individuals at the sub-national level who have advanced democratic principles through the use of technology - increasing accountability, transparency or participation”, an invite from IRI for Mr. Seleso’s participation in this webinar event says.

The webinar network event is part of IRI’s initiative to provide a space for innovative subnational actors who have advanced democratic principles and for them to connect, share, inspire and learn from one another through the online sessions.

“You see the South Guadalcanal Development Plan 2019 - 2023, is not what I want for the people but what they want us to achieve. Work has already started for some of our plans and I am optimistic that we will be able to achieve what has been set down in the development plan”, Seleso told Solomon Times Online.

IRI has worked in more than 100 countries since 1983 and currently has offices in 40 countries worldwide. IRI believes that each country’s path to democratic development is unique and that all democracies must be sustainable, and can be when people and their issues are prioritised.